This page is a tribute to Ziggy Stardust, a beautiful dog we adopted in 2022 who lived too briefly. These are some of the things Anina and Paul loved about him, so that Ziggy’s memory will live on. ❤️

To see our few video memories of Ziggy, scroll all the way down. 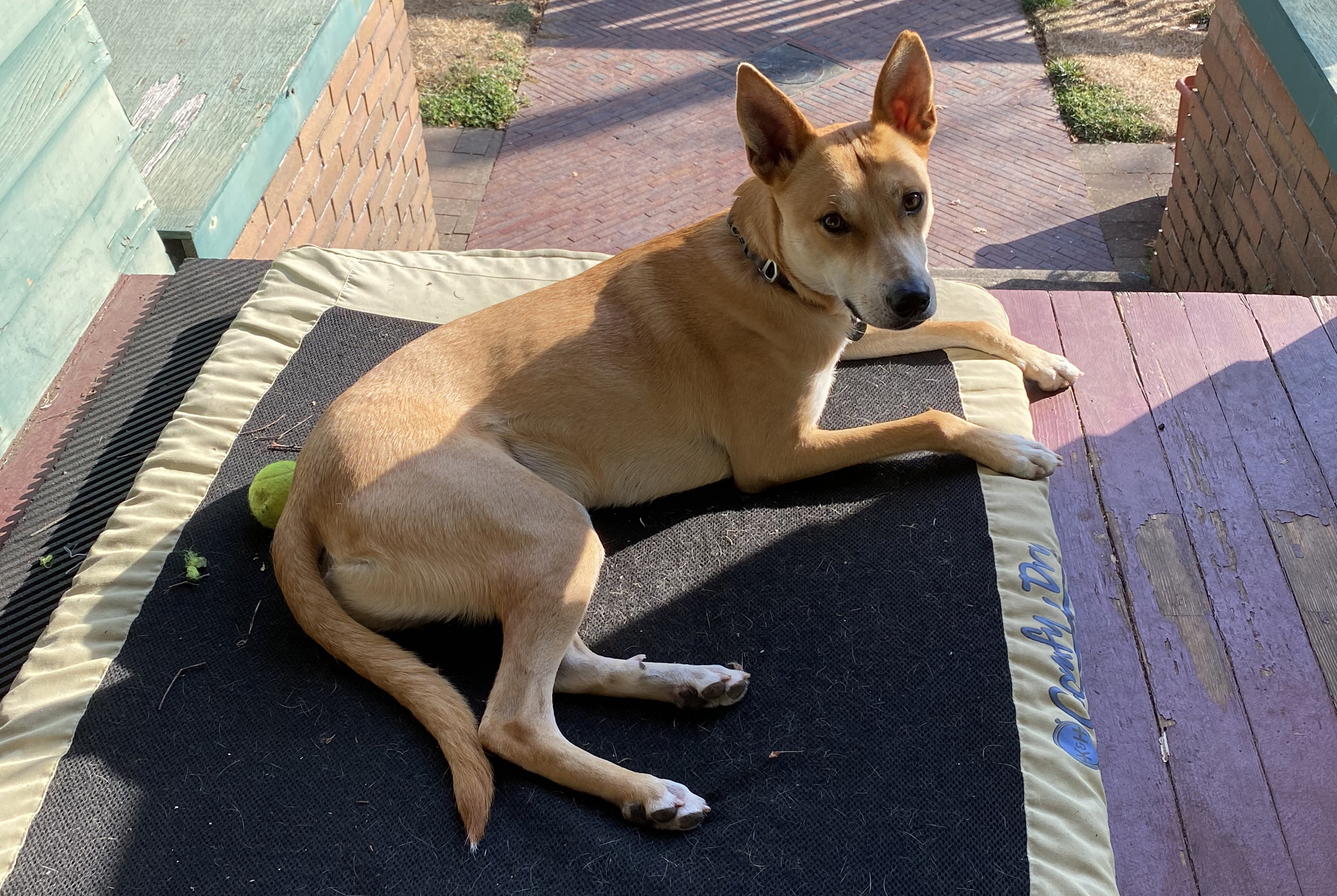 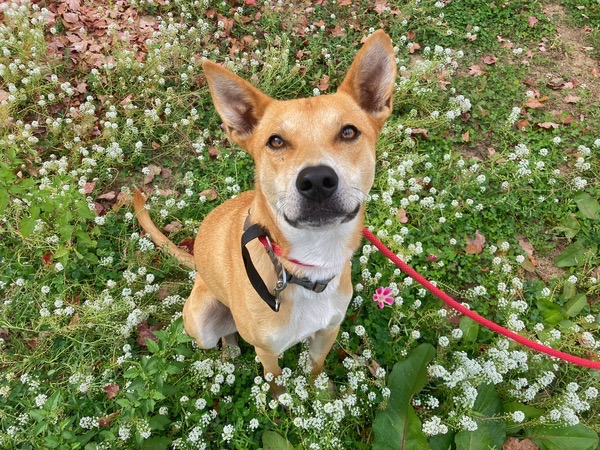 We went to meet Ziggy twice at the Humane Society before going back a third time to adopt him. For the first meeting, they suggested bringing “high-value” treats, like cheese or hot dogs. The day before, I defrosted a couple of hot dogs we had on hand and chopped them up as treats.

The second time we met Ziggy, I was thrilled when he recognized us! He wagged his curly tail and trotted over to see if we had hot dogs.

There was a kiddie pool at the Humane Society, with a little water in it. At one point Ziggy walked calmly into it and stood in the water. “He likes getting in water,” they told us with a shrug. 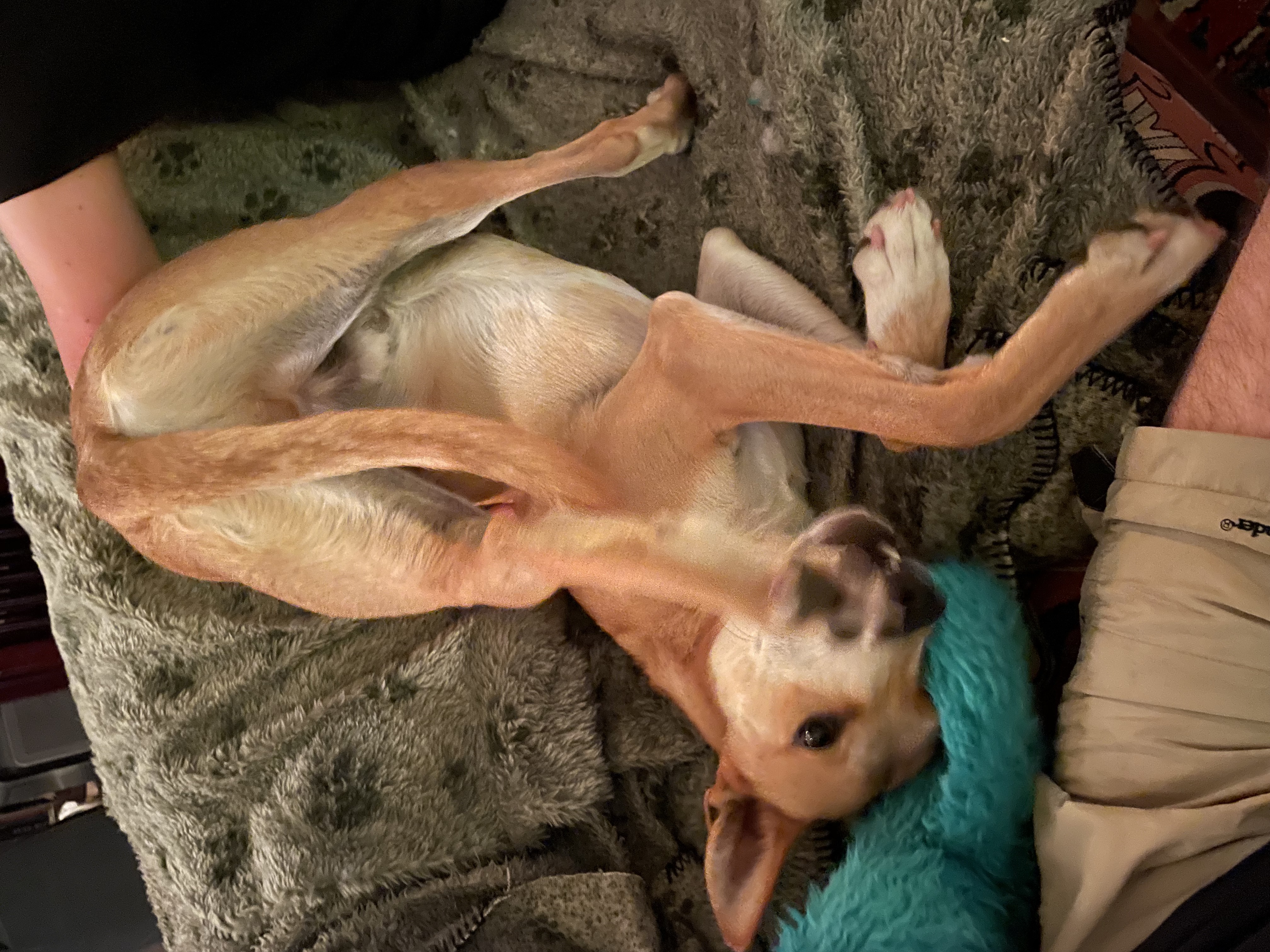 On Ziggy’s first night in our house, after playtime and dinner, we settled on the couch with him. He was so happy, he rolled over on his back for belly rubs and got all wiggly.

Earlier in his life, Ziggy was in the Multnomah County Animal Shelter. His official behavioral evaluation described him as “wiggly.” Accurate! When Ziggy got super excited during playtime, sometimes he wiggled himself into sort of a corkscrew pose, upside down with his butt curving over his head.

Playing fetch indoors, Ziggy immediately took to running at our couch and leaping up on it with his toy. There he would prance around to entice us into playing tug of war with him. Eventually we’d get the toy back and throw it again — throw, chase, couch leap, tug, throw, repeat.

We waited a while before taking Ziggy anywhere crowded or with other dogs, so he could get to know us as his people. Every successful “first” felt like a big milestone. Paul and I went together the first time we took him to a food cart pod, first time playing with other dogs at a schoolyard, and first time at the off-leash dog park at Mount Tabor.

We loved seeing Ziggy run around and play with dogs! Our last dog didn’t get on well with other dogs, so it had been years since we’d been to the off-leash dog park. I found out I can still do a dog whistle that’ll summon half the dogs within earshot. And on our way out, we met a tiny yellow dog whose name turned out to be Ziggy Smalls. 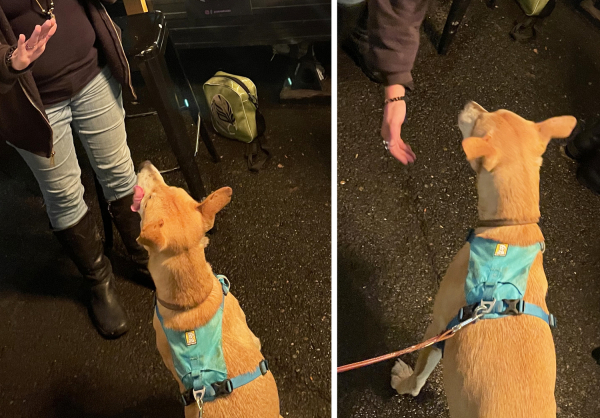 When taking Ziggy to food pods, people would be entertained by his biped bit, with his tiny paws on the counter ledges of their truck. We’d let Ziggy get his front paws up on the pod’s picnic benches, then allowed him to sit, stand, or lay on the tabletop itself, much to the amusement of everyone in the pod. Ziggy always wanted to be on a riser, a stage, some kind of high ground in any given situation. His natural lucidity seemed to motivate an attempt at a kind of sensory lighthouse beam from an outcropping, trying to reach as far as possible. 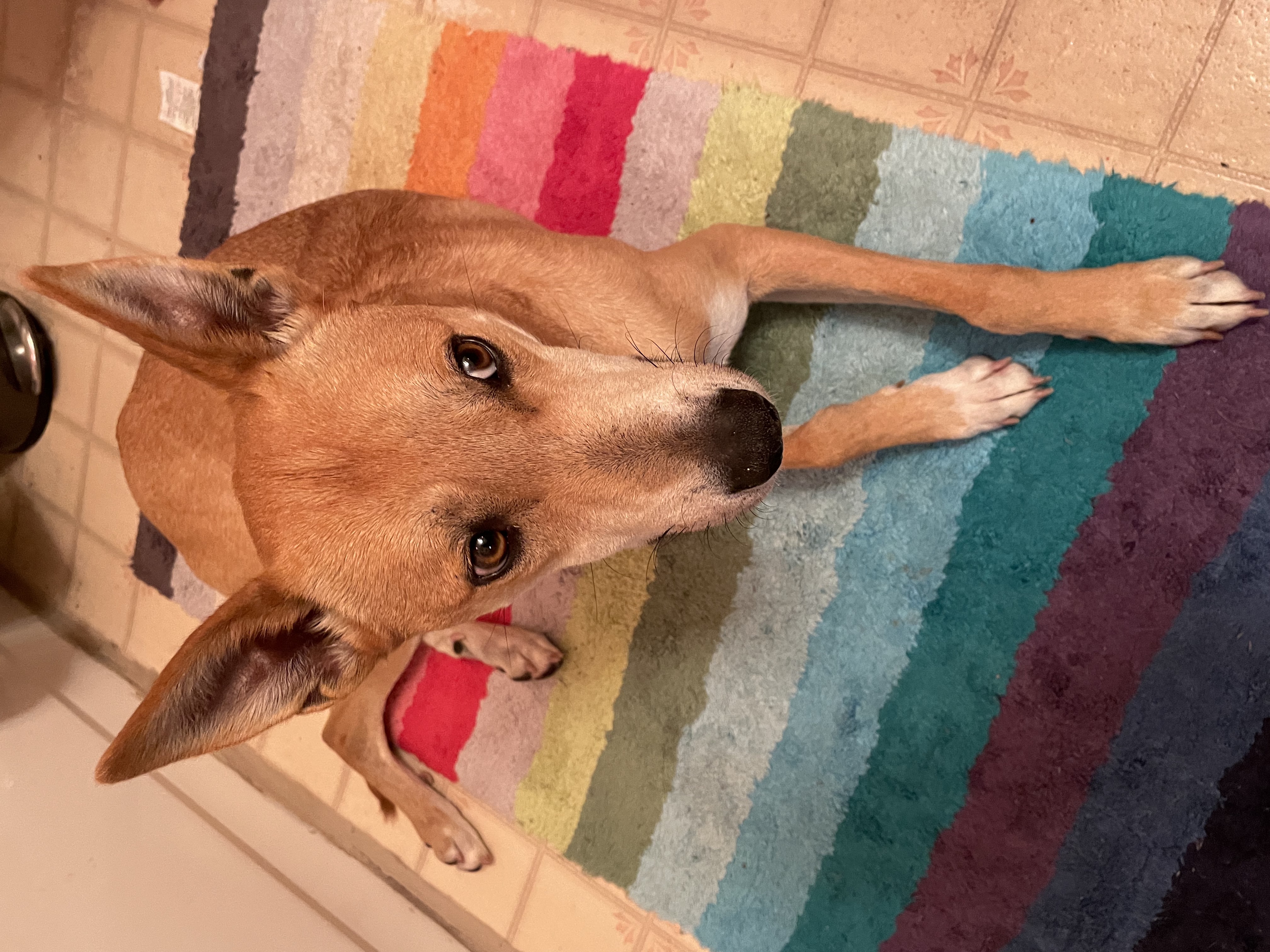 Everyone who saw Ziggy take a treat was amazed by how gently he would take it from your hand. You could hold out one little kibble for him, between your thumb and forefinger, and he would precisely remove that one kibble and calmly eat it.

Ziggy was smaller than our previous dogs, and I would marvel at how tiny his paws were. When he crossed his paws at the wrist, he looked so dainty. 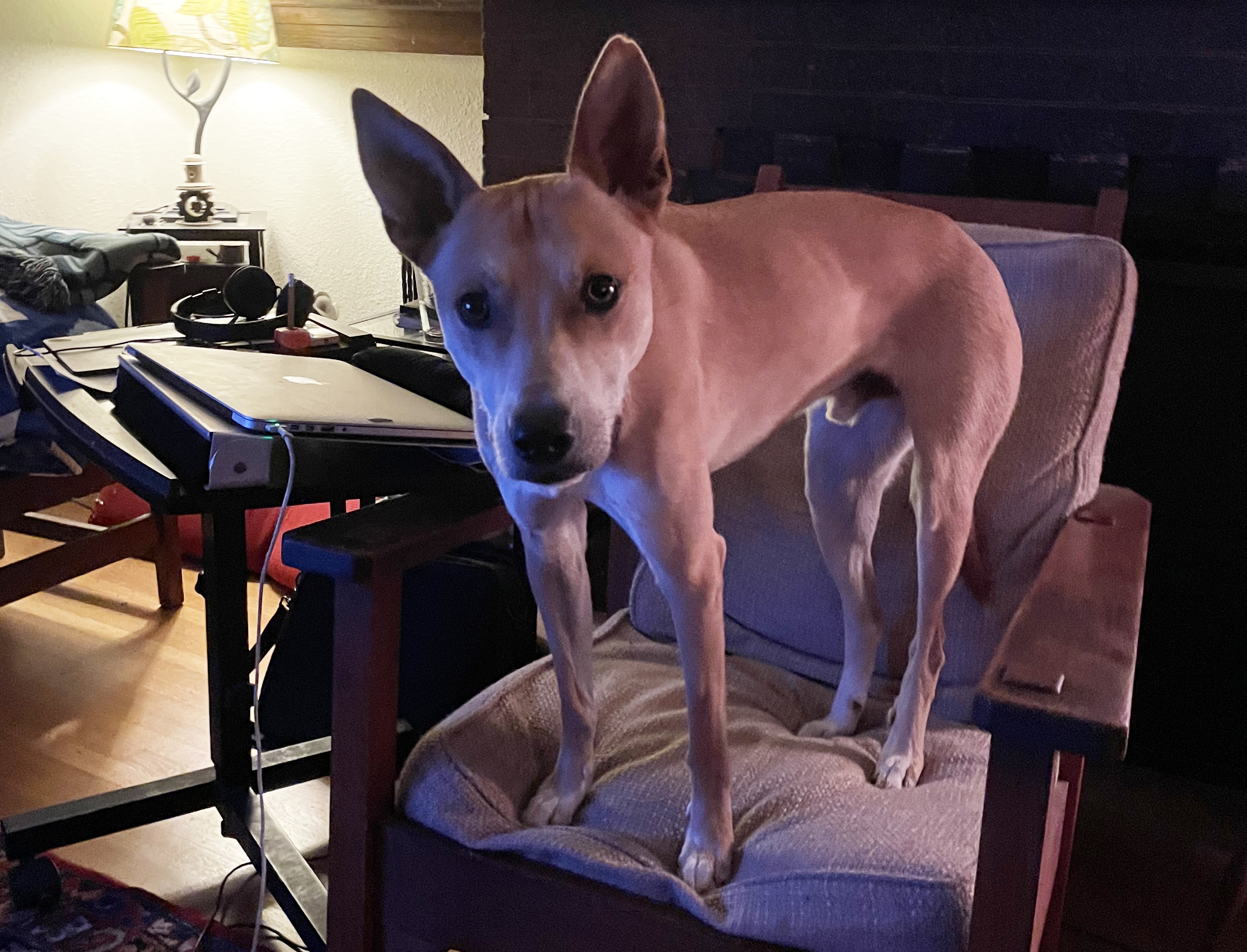 Ziggy was extremely alert, constantly looking at and listening to everything around him. His vision and hearing were so keen, we joked about how he had superpowers. Ziggy’s cute, pointy ears were constantly swiveling around like little satellite dishes, attuned to the slightest sound or sign of movement.

Ziggy’s ears would move in independent ways, suggesting his processing different input from different directions. His ears were tremendously expressive, with a full range of motion that revealed much about whatever his mood was. Add the dramatic tail he had, and he was an open book of what he was feeling at any given moment.

Ziggy loved his harness because it meant walk time! As soon as he saw one of us with his leash and harness, he’d get all wiggly and run over to stick his head right into his harness.

I have an old VW New Beetle, which Ziggy rode in many times. When he was riding with both me and Paul, Ziggy’s favorite spot was standing with his front paws in between the front seats, so his head was between us. When one of us drove solo, Ziggy liked riding shotgun in the front passenger seat. People in other cars always smiled when they saw him. 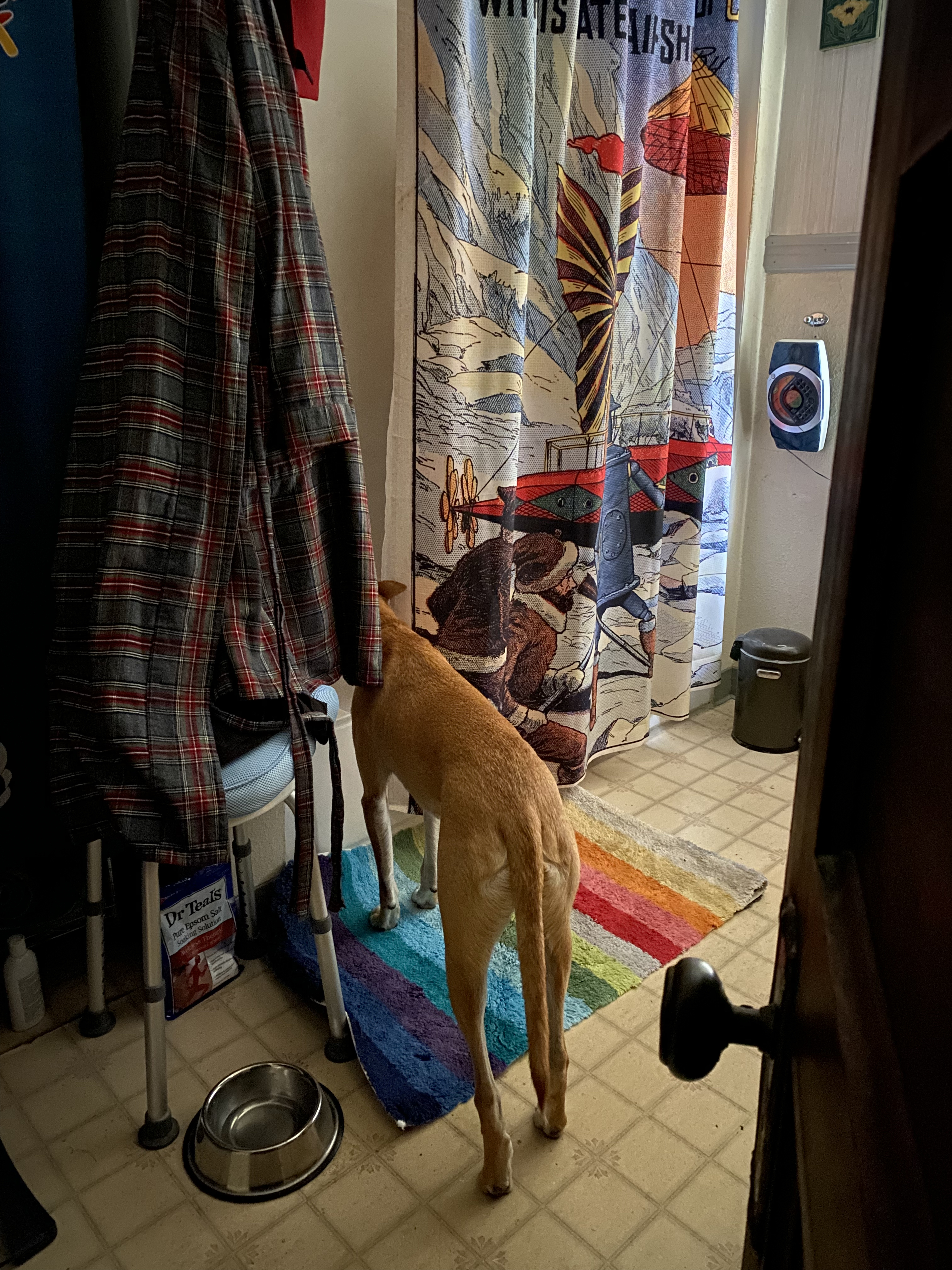 For the first week or two after we adopted Ziggy, he would always follow me into the bathroom and try to sniff my underwear while I peed. I figured he wanted to make sure he knew what his new people really smelled like. He also liked to visit us while we showered and poke his head inside the curtain.

Twice, Ziggy peed in our upstairs bathroom at night while we slept. The first time, I was annoyed. The second time, I realized he wasn’t sure how to wake us up to let him out — so he went and peed in the room where we pee.

I work a full-time remote job, and Paul is a freelancer, so we’re home a lot. Ziggy immediately got used to me and Paul both being around most of the time. That dog didn’t like it if either of us left the house without him. When Paul went out one day and I was in another video meeting, Ziggy stood up with his paws on my shoulders to join the meeting.

When Anina went somewhere, Ziggy would whine. On a couple occasions, Anina’s departure was early, before I got out of bed. Ziggy would stand on me while I was in bed, and paw my head. I thought of it as a scene from a cop movie, “Hey, partner, get up. We got a missing persons case to solve.”

Ziggy was taken to Helioscope a couple times, a comic book studio I co-founded. My studiomate Colleen Cover, who can be quite a crankypants, was immediately won over by Ziggy’s intelligence and calm demeanor. Steve Lieber, another member, was an instant fan and began to photograph Ziggy like a supermodel. Like the rockstar our dog was named after, Ziggy “could lick ’em by smiling.” 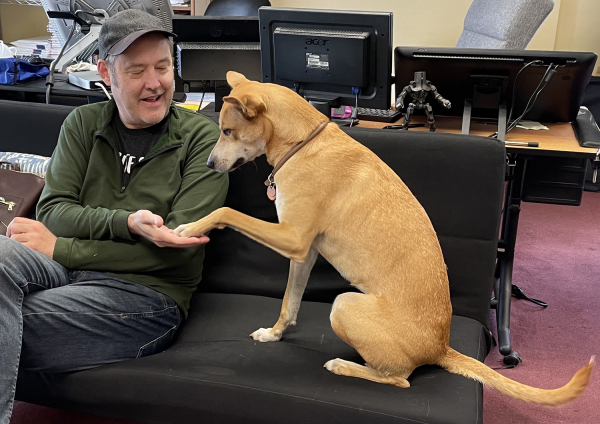 Our last dog loved banana, so we were surprised when Ziggy turned up his nose at it! Paul secretly enjoyed feeding the last bite of his banana to our dog, so he was warming Ziggy up to small bits of banana. 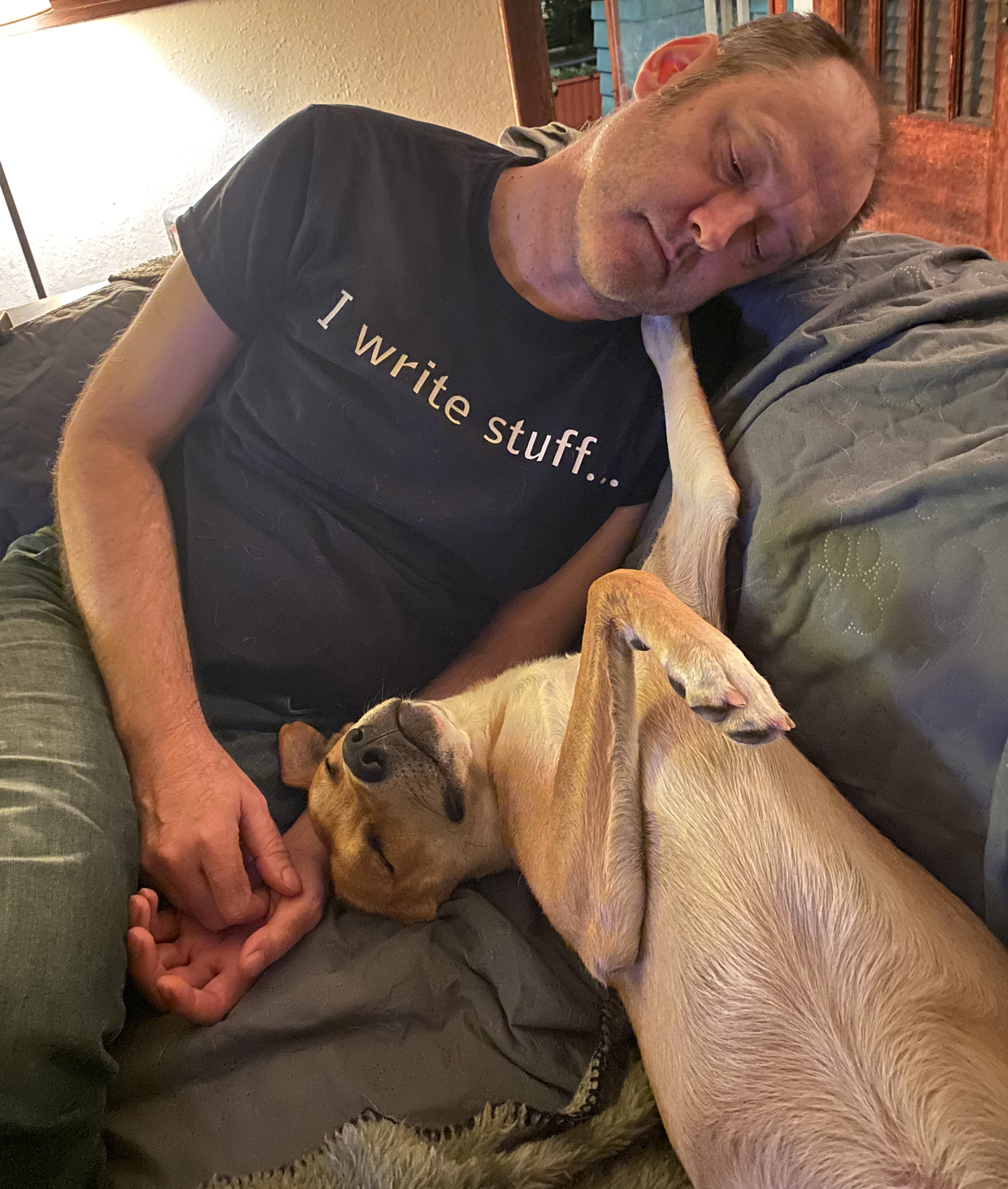 Ziggy had some previous training. He quickly picked up on not just verbal, but also hand signals for stay, come, sit, down, and up—“up” meaning when he goes bipedal. That last one blew me away. I was working with him on walking forward on his back legs, like in an Our Gang short circa 1930.

Ziggy would happily heel on dog walks, a companion. I gave him long leash leeway when he was interested in sniffing something. When we went to the off-leash dog park, he’d pull at the leash with unparalleled interest as we approached the entrance. Like a Husky at the Iditarod. Once there, Ziggy never escalated a situation where playful wrestling got too vocal or physical. We saw other dogs get carried away, but not Ziggy.

Ziggy was at the Humane Society twice: Once as a baby, around six months old, after he was turned in to the Multnomah County Animal Shelter. In his records, there’s a report that he was found in Lents Park and may have been living with unhoused people. MCAS referred him to the Humane Society, where he went through their behavioral training program. His name then was Brett.

Ziggy eventually got adopted out, then was returned to the Humane Society about a year later. They renamed him Cowboy because the staff thought it suited his personality better than Brett. His adoption page linked to the old “Meet Brett!” video on YouTube. I probably watched it a hundred times before we adopted Ziggy/Cowboy/Brett.

The sad reportage of his passing can be found on our blog, Farewell, Ziggy Stardust 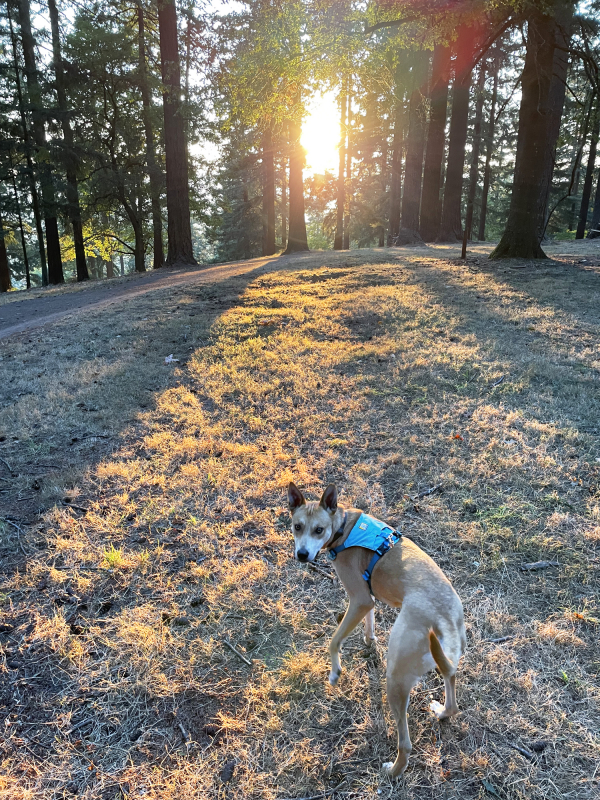 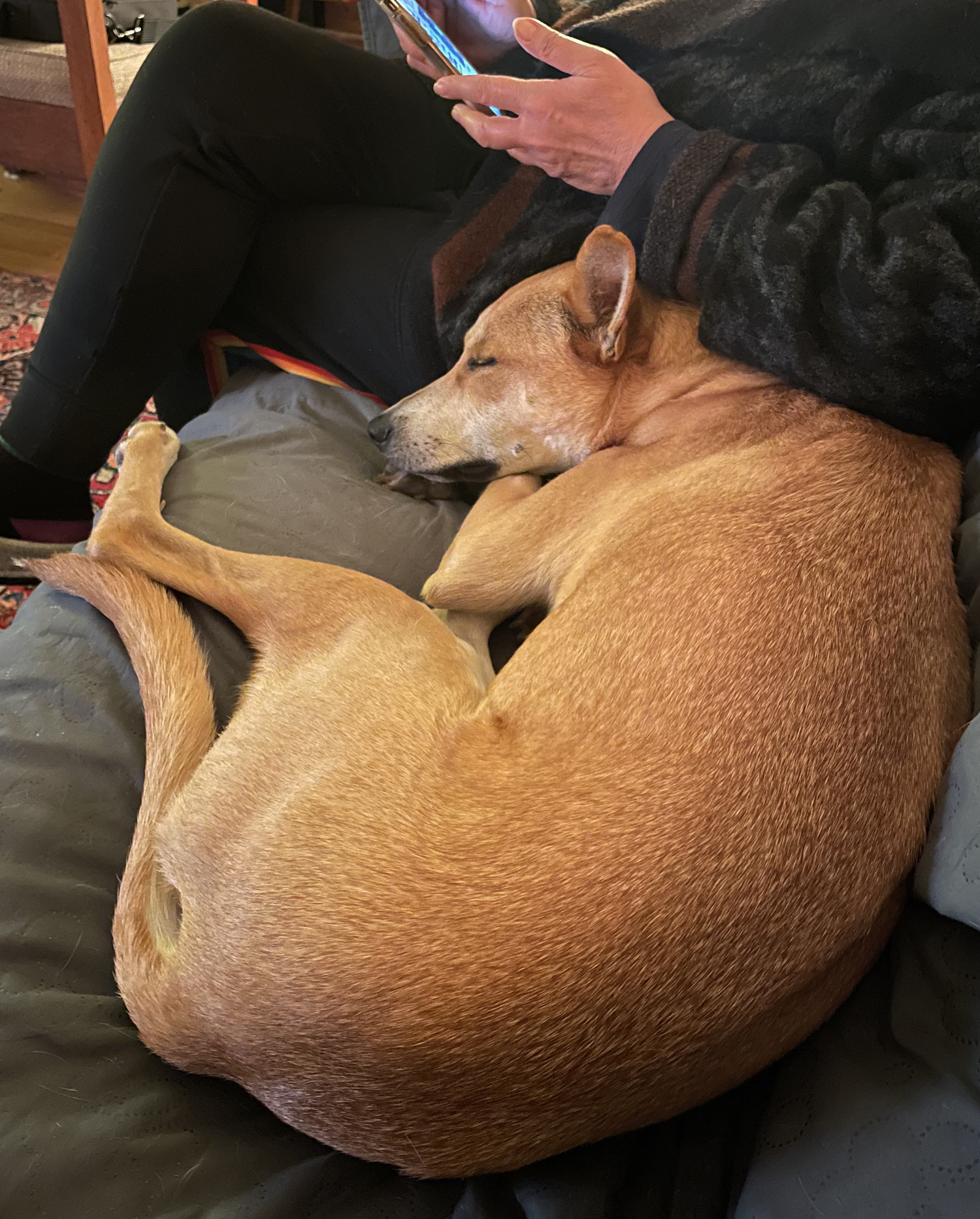 Your ghost is everywhere
in our house.
In the empty spaces
lies your memory
curled up on our couch
basking in golden sun
chasing toys up our stairs
pacing our steps
and always, gazing brightly
ears perked
for the slightest
sound of our presence 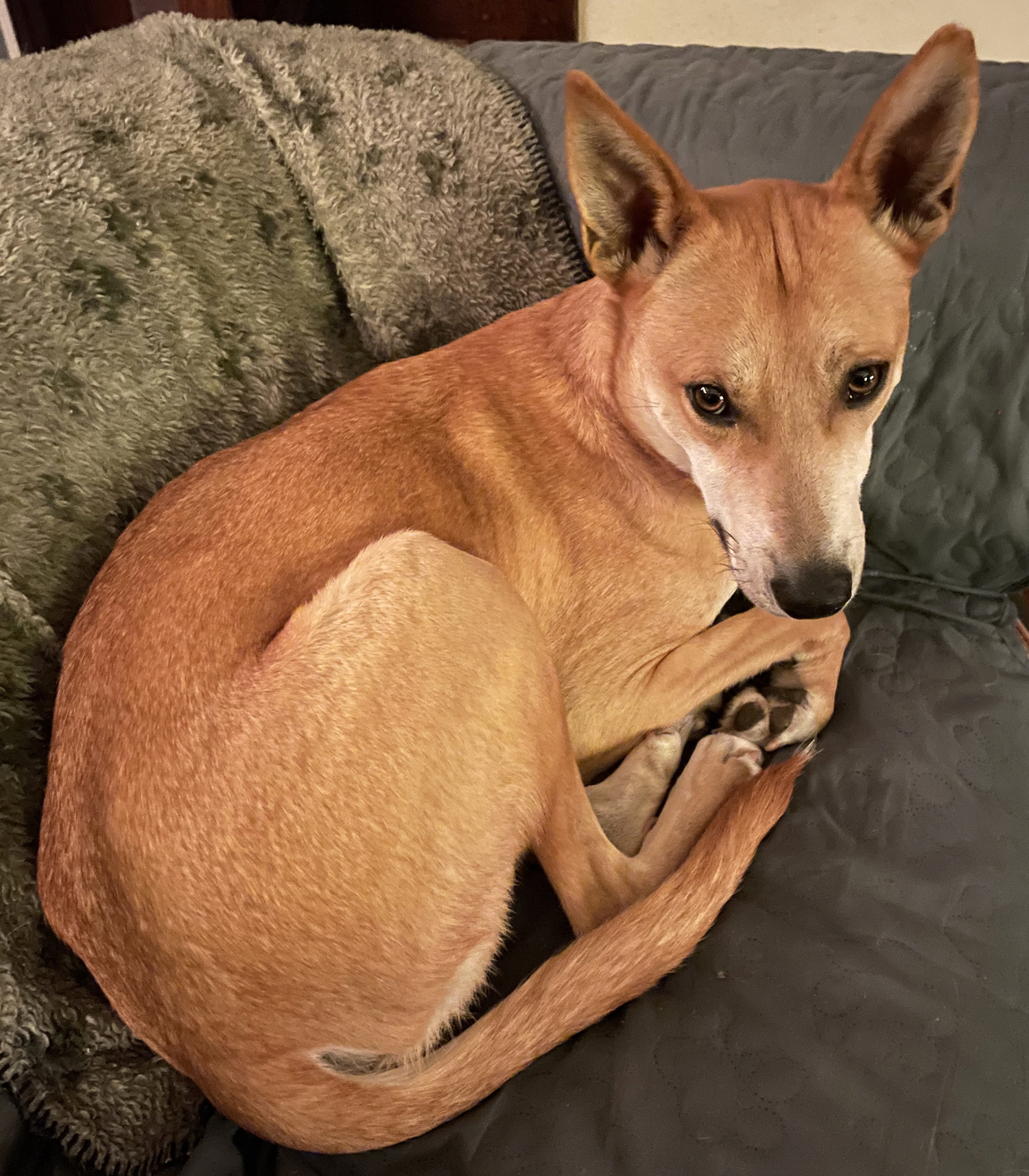