For educators and parents 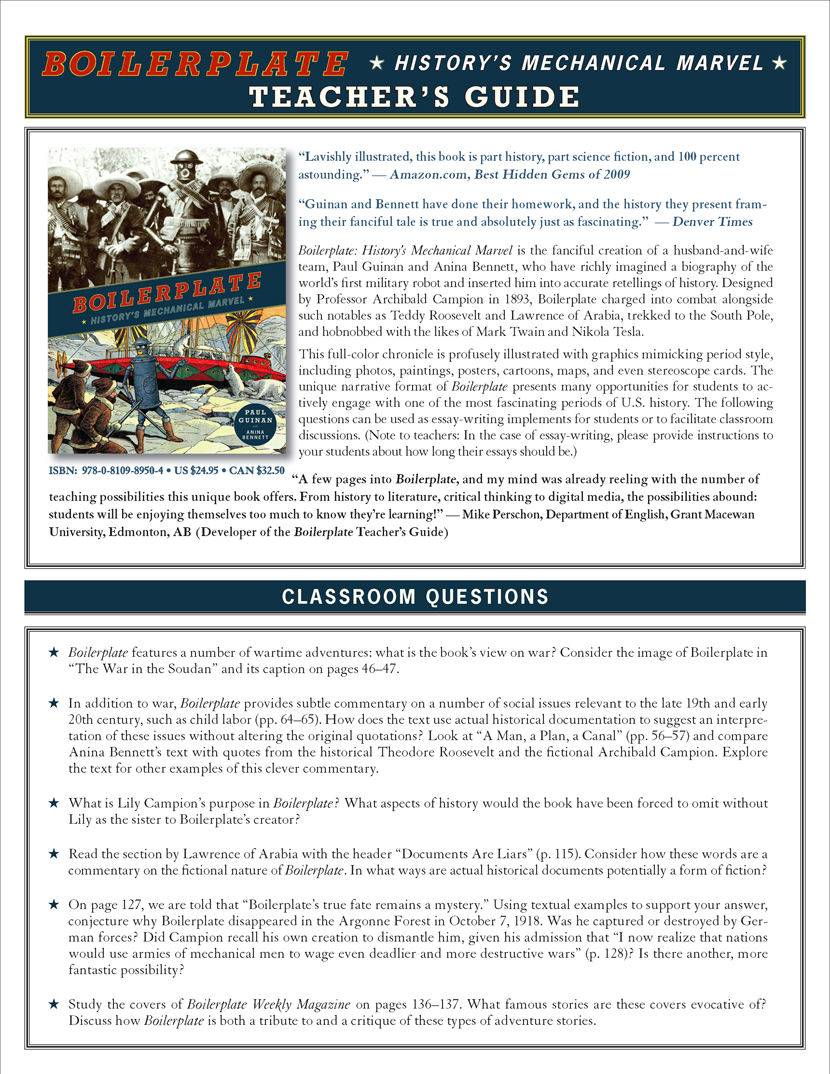 Boilerplate: History's Mechanical Marvel is more than just a fun book about a robot's historical adventures. It can also be used to teach history, visual literacy, literary style, and critical thinking. Please feel free to download our Boilerplate Teacher’s Guide and share it, or use the text version below.

The guide, developed by professor Mike Perschon of MacEwan University (aka the Steampunk Scholar), contains simple yet insightful questions and exercises. As Mike put it: “A few pages into Boilerplate, and my mind was already reeling with the number of teaching possibilities this unique book offers. Students will be enjoying themselves too much to know they’re learning!”

We hope to also post a Common Core curriculum guide for Boilerplate here, which is currently in progress, so stay tuned! And if you’re interested in learning materials for comic books, see Anina’s Writing Guide and learning resources pages.

Boilerplate: History’s Mechanical Marvel features a number of wartime adventures: what is the book’s view on war? Consider the image of Boilerplate in “The War in the Soudan” and its caption on pages 46–47.

In addition to war, Boilerplate provides subtle commentary on a number of social issues relevant to the late 19th and early 20th century, such as child labor (pp. 64–65). How does the text use actual historical documentation to suggest an interpretation of these issues without altering the original quotations? Look at “A Man, a Plan, a Canal” (pp. 56–57) and compare Anina Bennett’s text with quotes from the historical Theodore Roosevelt and the fictional Archibald Campion. Explore the text for other examples of this clever commentary.

What is Lily Campion’s purpose in Boilerplate? What aspects of history would the book have been forced to omit without Lily as the sister to Boilerplate’s creator?

Read the section by Lawrence of Arabia with the header “Documents Are Liars” (p. 115). Consider how these words are a commentary on the fictional nature of Boilerplate. In what ways are actual historical documents potentially a form of fiction?

On page 127, we are told that “Boilerplate’s true fate remains a mystery.” Using textual examples to support your answer, conjecture why Boilerplate disappeared in the Argonne Forest in October 7, 1918. Was he captured or destroyed by German forces? Did Campion recall his own creation to dismantle him, given his admission that “I now realize that nations would use armies of mechanical men to wage even deadlier and more destructive wars” (p. 128)? Is there another, more fantastic possibility?

Study the covers of Boilerplate Weekly Magazine on pages 136–137. What famous stories are these covers evocative of? Discuss how Boilerplate is both a tribute to and a critique of these types of adventure stories.

What is the irony of the date of Archibald Campion’s death, given that the event the text relates to happened the next day, on October 31, 1938? Discuss the further irony of this in light of “The Strange Case of the Spoofer Captured by a Spoof” at The New York Times online.

Paul Guinan has inserted his miniature Boilerplate figure into historical photos using digital media software with results that are often stunningly realistic. Discuss how historical documentaries often use “dramatized” footage that has been aged or made to look like real footage, and how this skews public perception of historical events.

Compare Boilerplate with the film version of Forrest Gump starring Tom Hanks. Consider how, despite their presence at pivotal moments in American history, neither of these characters affects the course of history. What might be the purpose of placing a fictional character in the midst of historical events? What difference do you think it makes that Paul Guinan and Anina Bennett chose an automated metal man as their fictional character, rather than a human being?

Enter names of major figures from Boilerplate into a search engine or Wikipedia to determine which ones are historical and which are not. In the case of historical ones, do further research—does the presence of Boilerplate change any historical events related in the book?

Have students write a research essay on a historical figure or event from Boilerplate, assessing why they were included in the text.

Have students choose an event in American history between 1893 and 1918, then research and write a short Boilerplate episode of their own, possibly even mimicking the style and format of the book. Remind them to consult the timeline provided in the back of the book to ensure they aren’t “double-booking” Boilerplate. Consulting the timeline would also provide possible topics not covered in-depth in the book, such as the raising of the sunken F-4 submarine in August–September of 1915.

Have students compare and contrast Boilerplate with other fictional “robots” with military purposes, such as James Cameron’s The Terminator, Iron Giant, RoboCop, or Transformers. How are the themes of war, social issues, and industry handled?