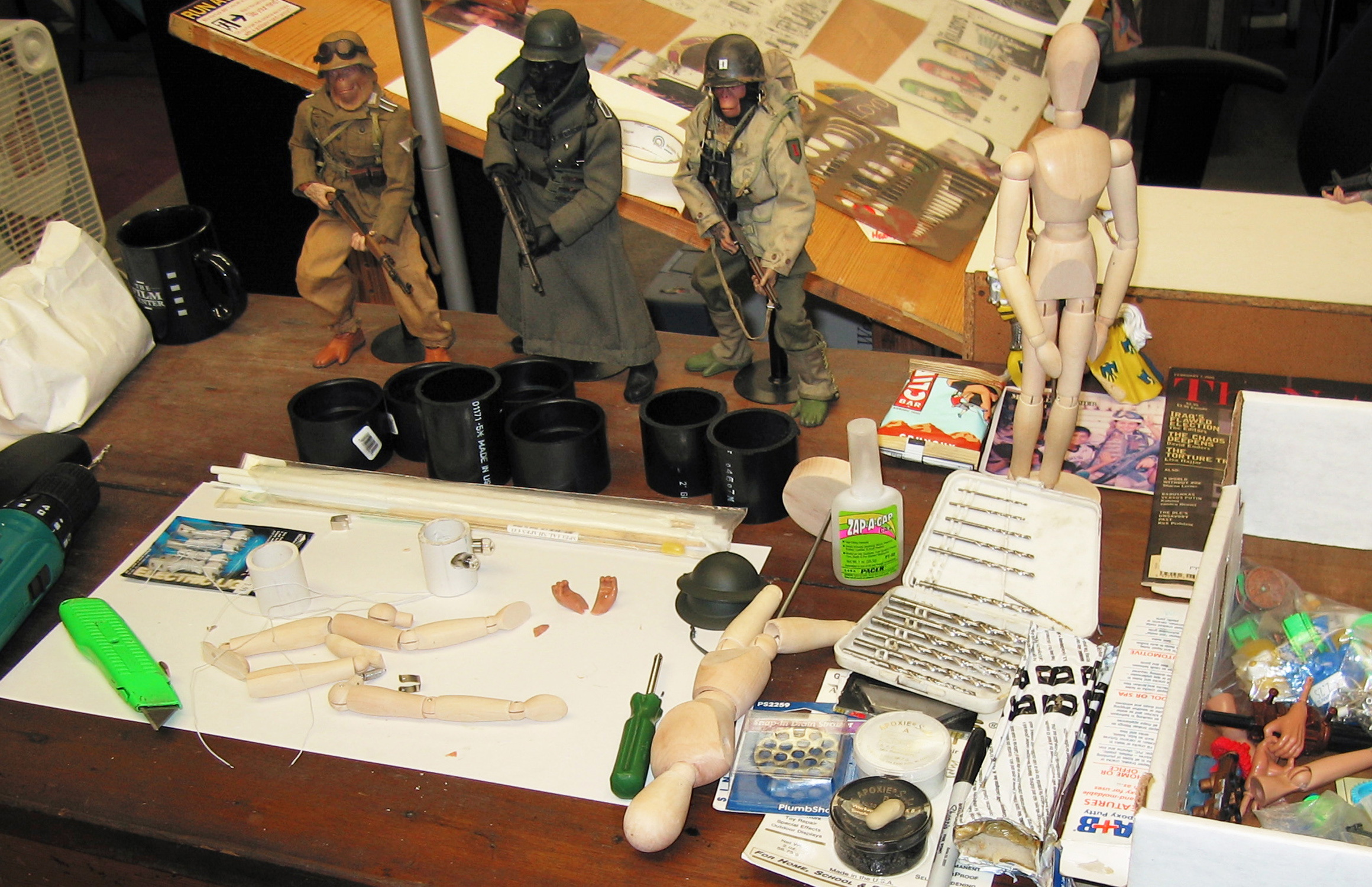 (Swipe to navigate in mobile view.) This page documents the construction of a commissioned 1/6-scale Boilerplate figure during the winter of 2007-2008. Paul has made only four of these articulated maquettes! The first one was used to create the images in our book.

The process begins with limbs taken from wooden artist mannequins, PVC pipe, and assorted miniature hardware. Here Paul has gotten started on the robot’s head, cutting a small piece of PVC pipe and installing electric dollhouse lights in it. 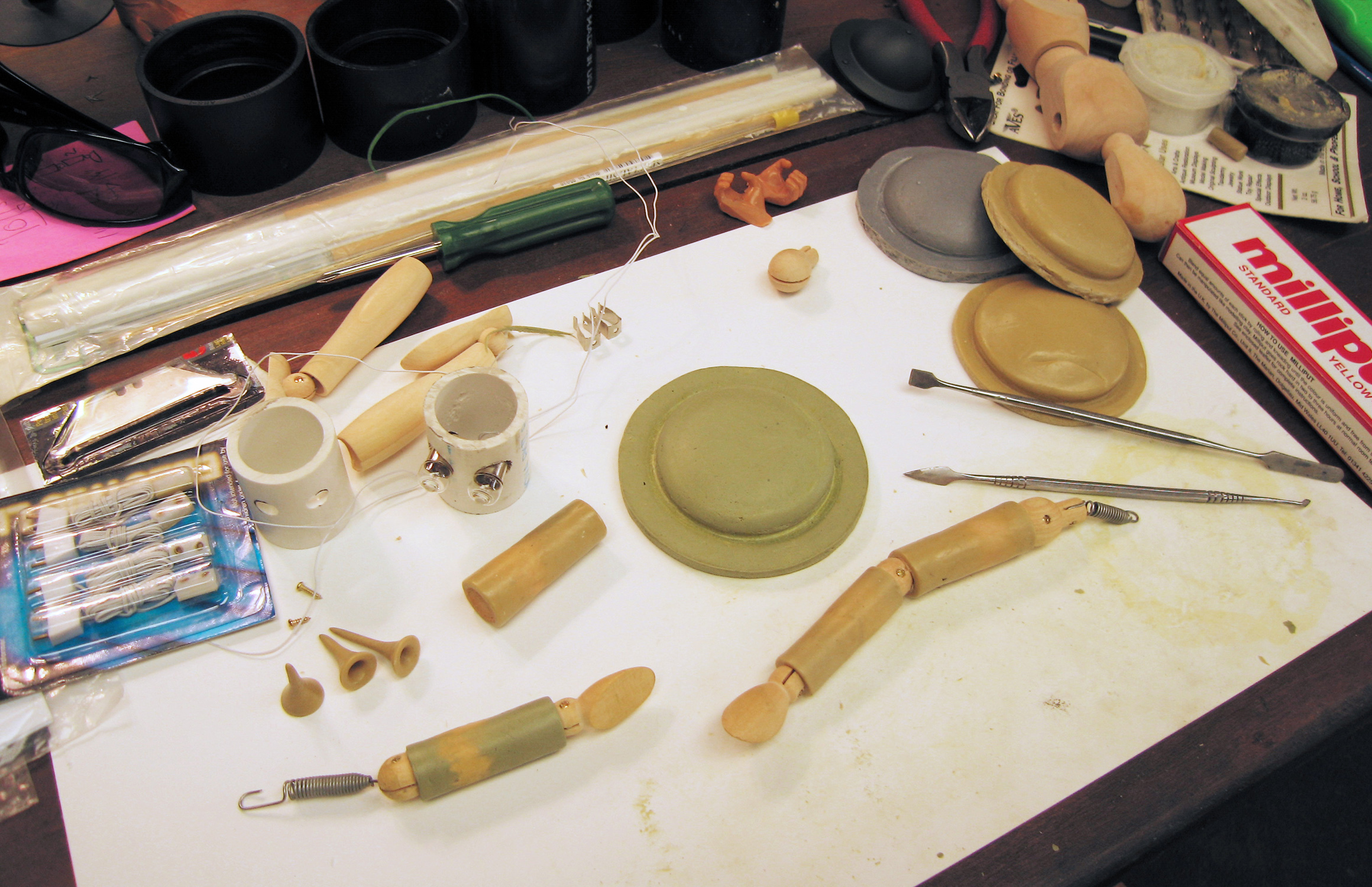 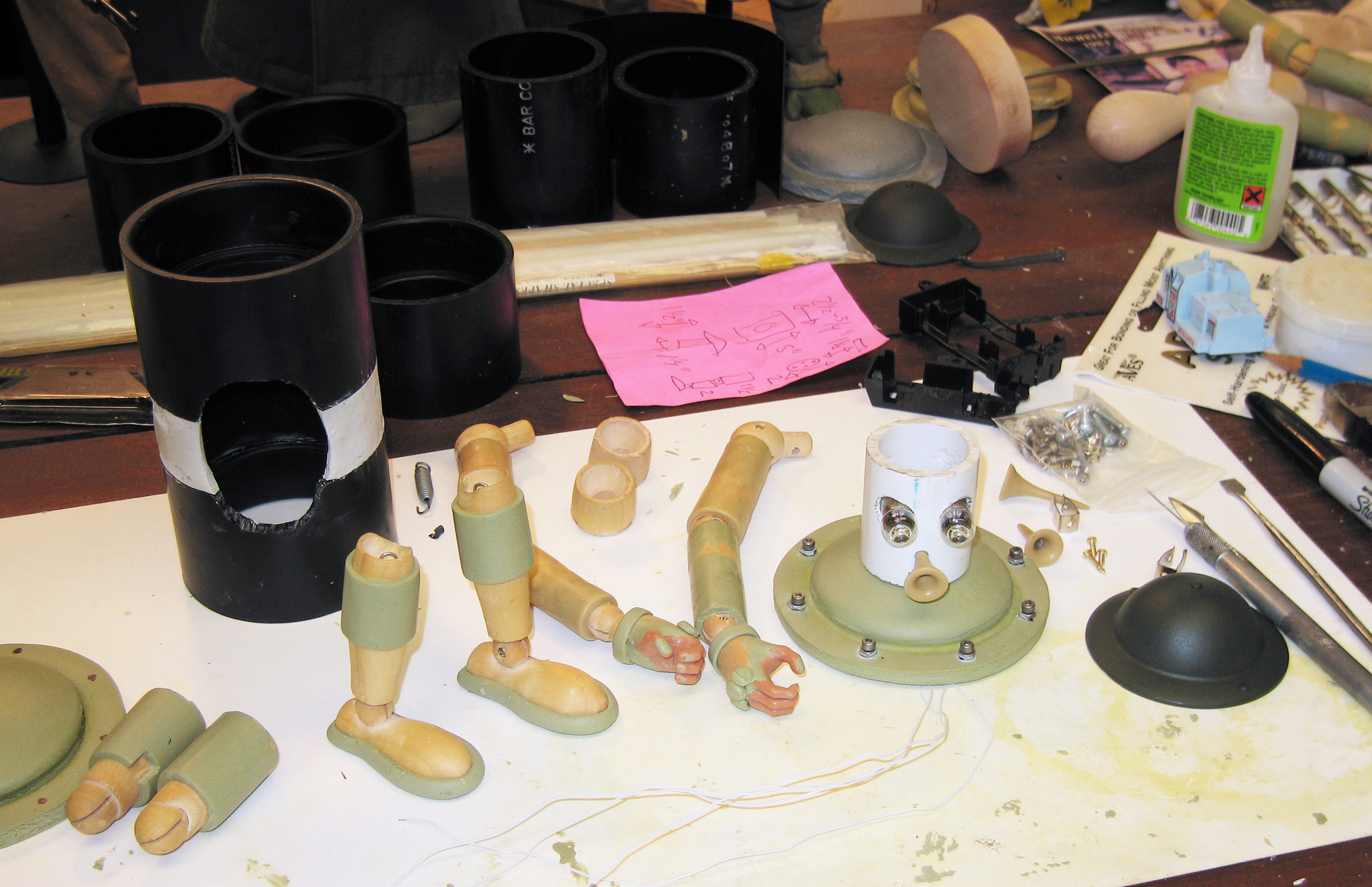 Building the figure in 1/6th scale allows Paul to incorporate existing parts, such as a WWI helmet and action figure hands. To create an access hatch on the torso, he cuts an oval out of the larger PVC pipe. He uses a smaller piece of PVC pipe to create the head, with working dollhouse lighting fixtures as eyes. Miniature hardware is used for the bolts on the upper end cap. 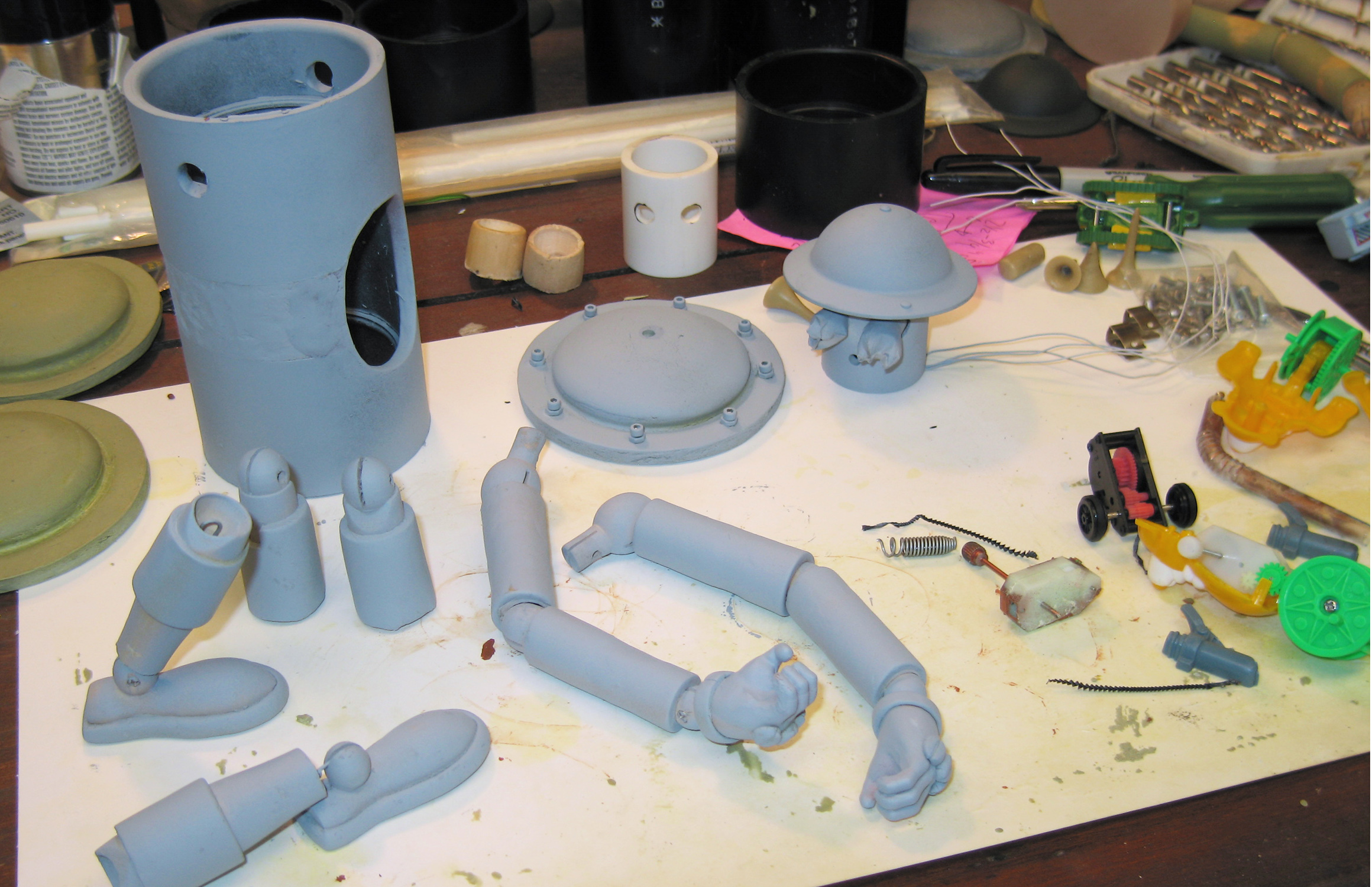 Before assembling the robot, Paul adds an initial primer coat to all parts. With other coats of paint to come, the glass “eyes” will remain masked off until the final detailing stage.

Not every part works out on the first try. You can see a rejected head and end caps in the background of this shot. 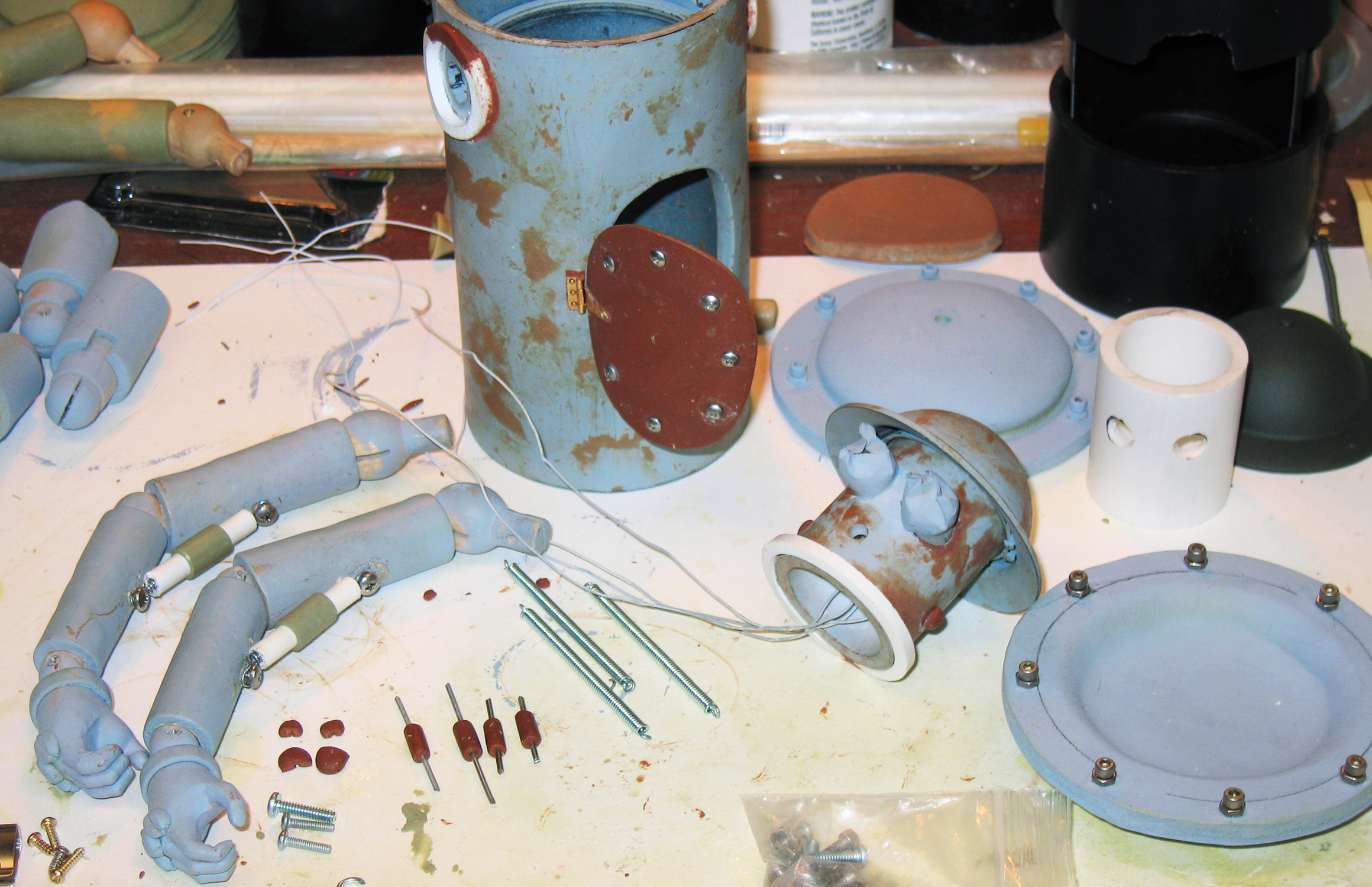 Next comes the detailing. Paul uses strip styrene to add trim around the neck and armpits. Wire and tube styrene are transformed into arm pistons, attached by miniature screws. Helmet “straps” (Boilerplate’s earpieces) are made of wire and epoxy putty. Paul also sculpts a torso access plate from epoxy putty, with miniature screws standing in for rivets. 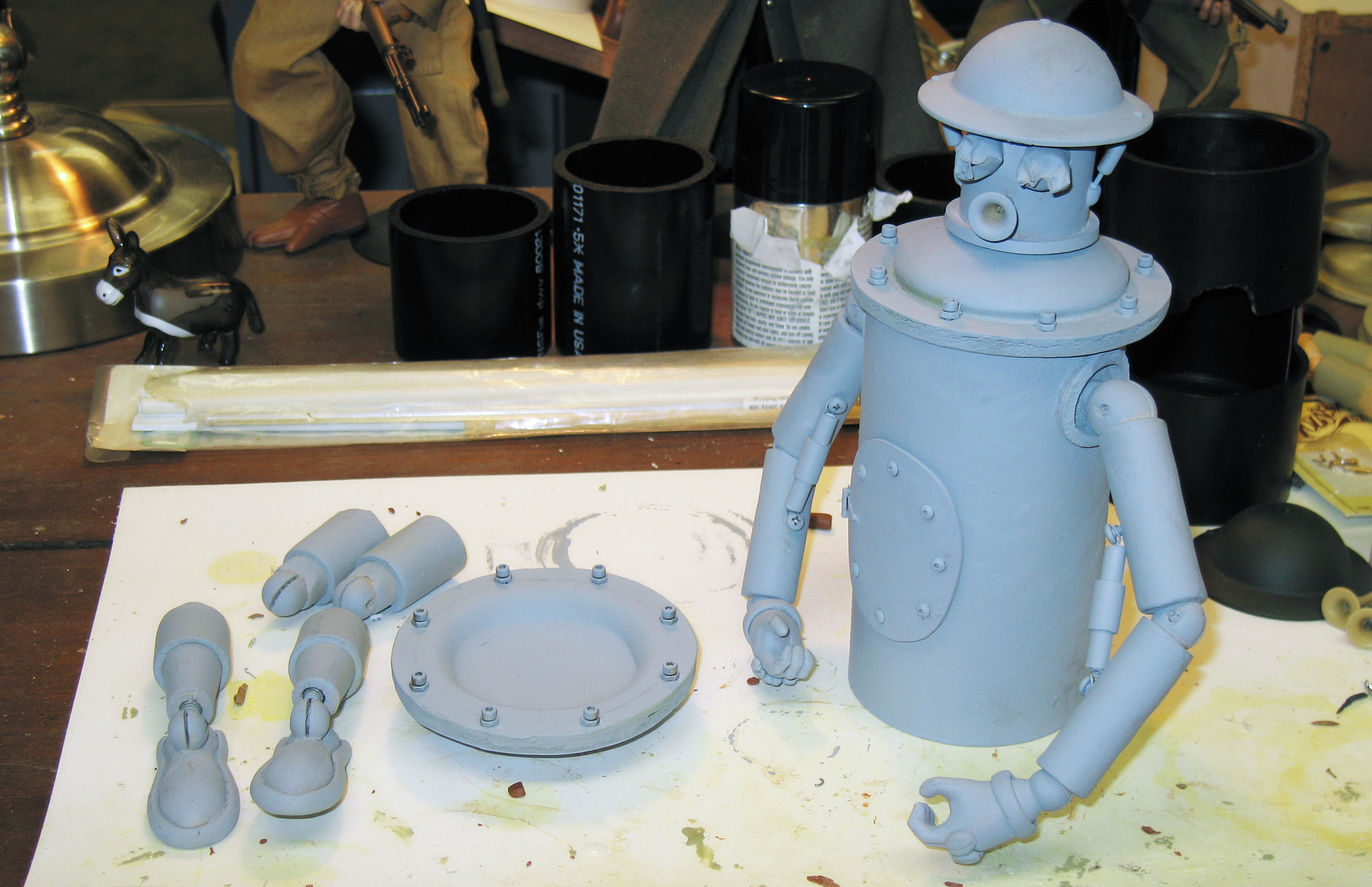 After attaching the figure’s detailed elements and hardware, Paul adds a final primer coat. Now it’s starting to look like a robot! 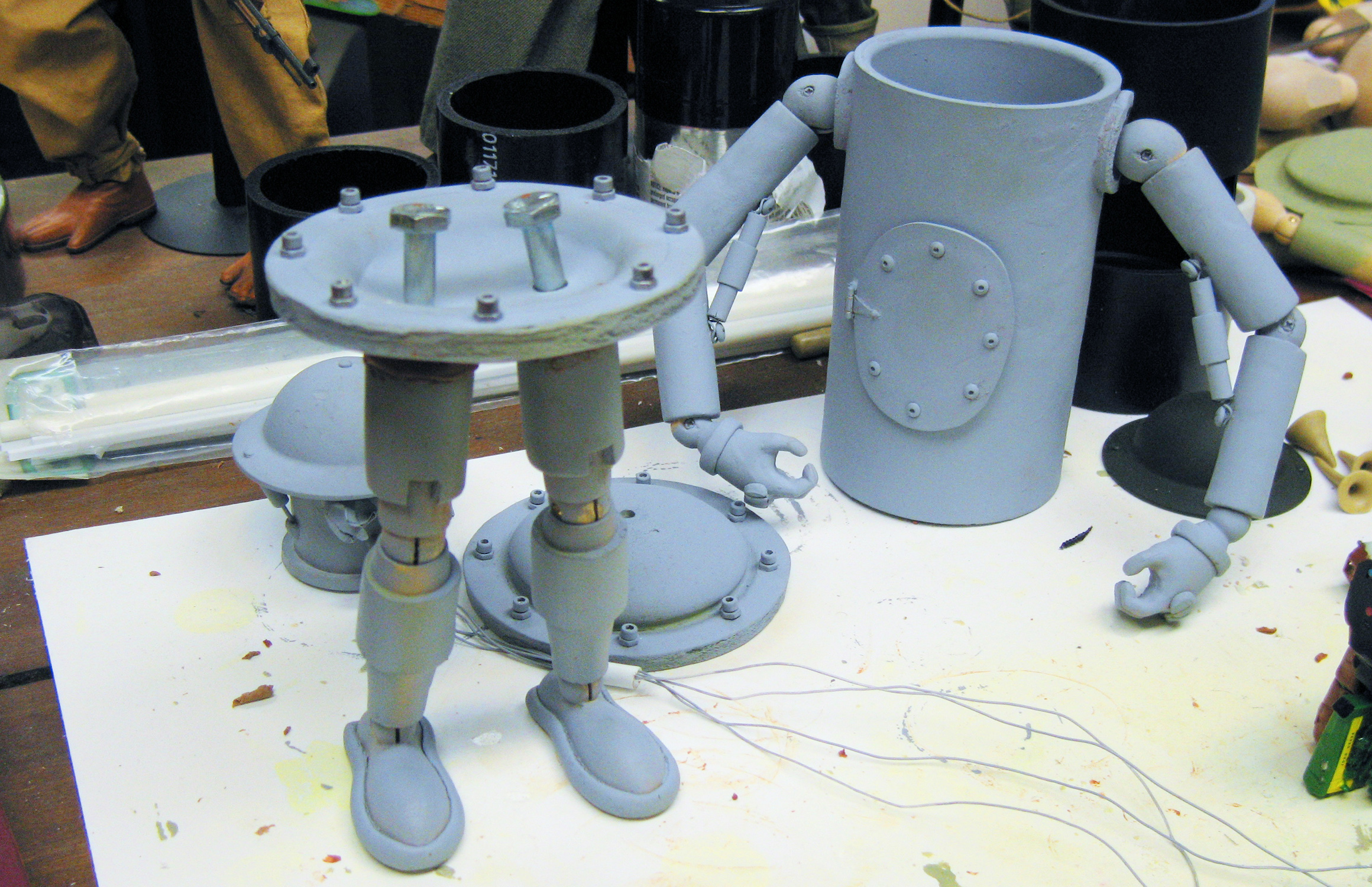 Leg assembly, just before attaching the torso. One of the most difficult aspects of the build is balancing the figure so that it can stand on its own, at least for short stints. 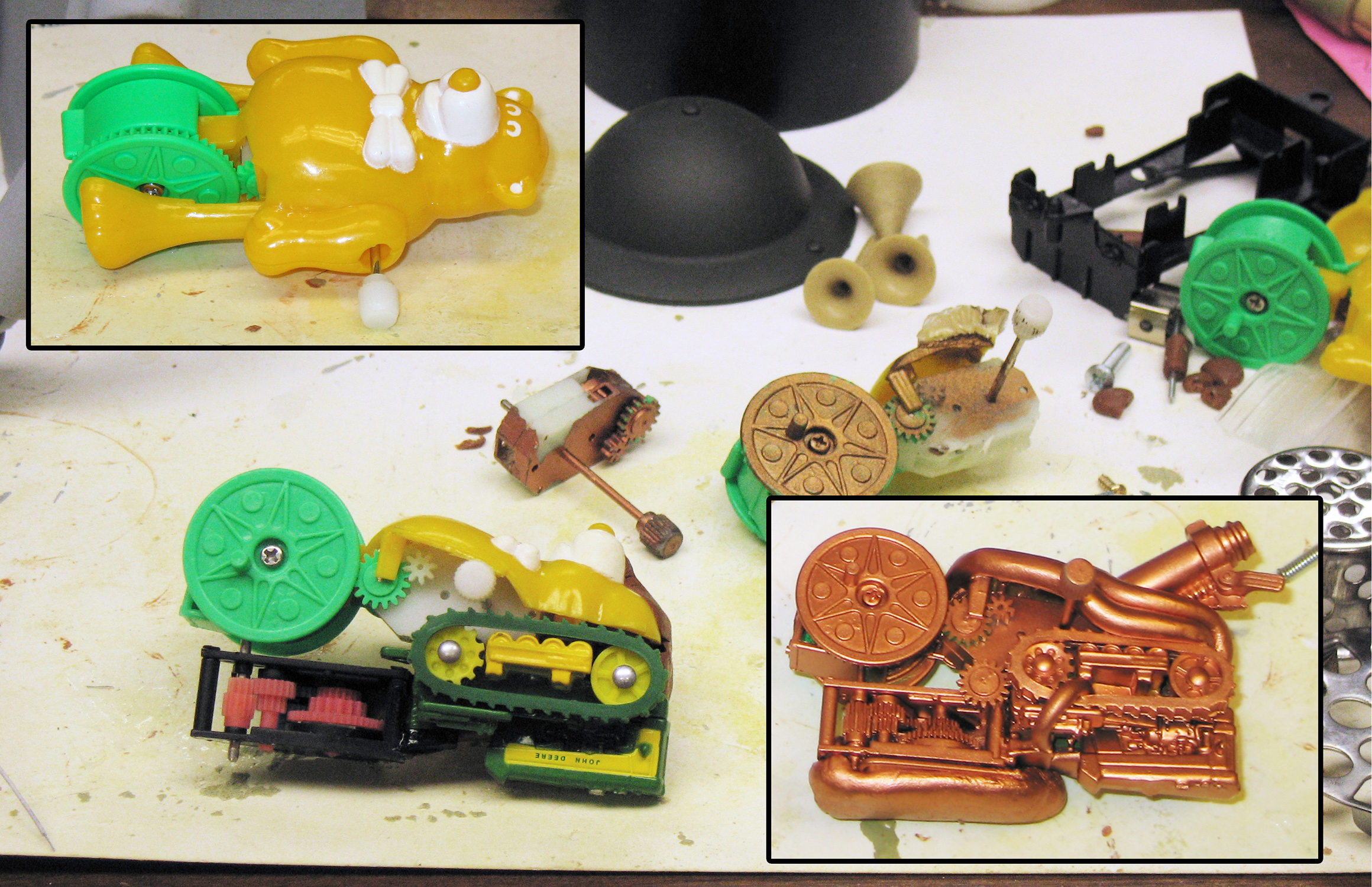 Boilerplate’s wind-up “guts” began life as a novelty toy. Paul chose this one because the bear’s unicycle has a Victorian-ish design.

Paul adds parts to the wind-up toy, to create the impression of an engine. The cam sprockets and timing belt are from a tiny toy tractor. 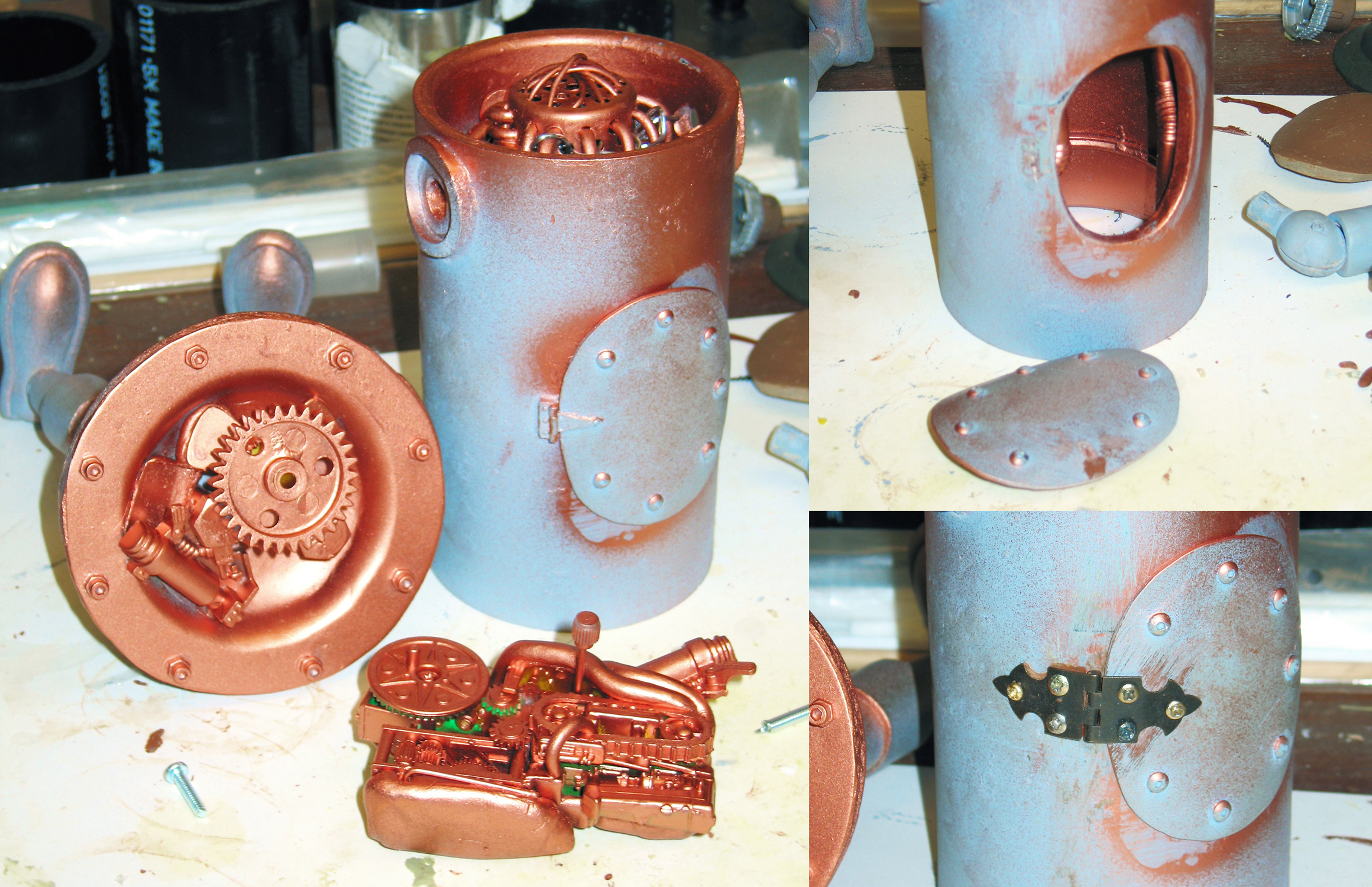 Tests prove the original hinge (top photo) of the chest plate isn’t strong enough to withstand the harsh conditions Boilerplate was built for. Paul replaces the hinge with a combat-strength version (bottom). He has applied a copper paint base coat to the robot’s innards, which you can see bleeding onto the exterior. 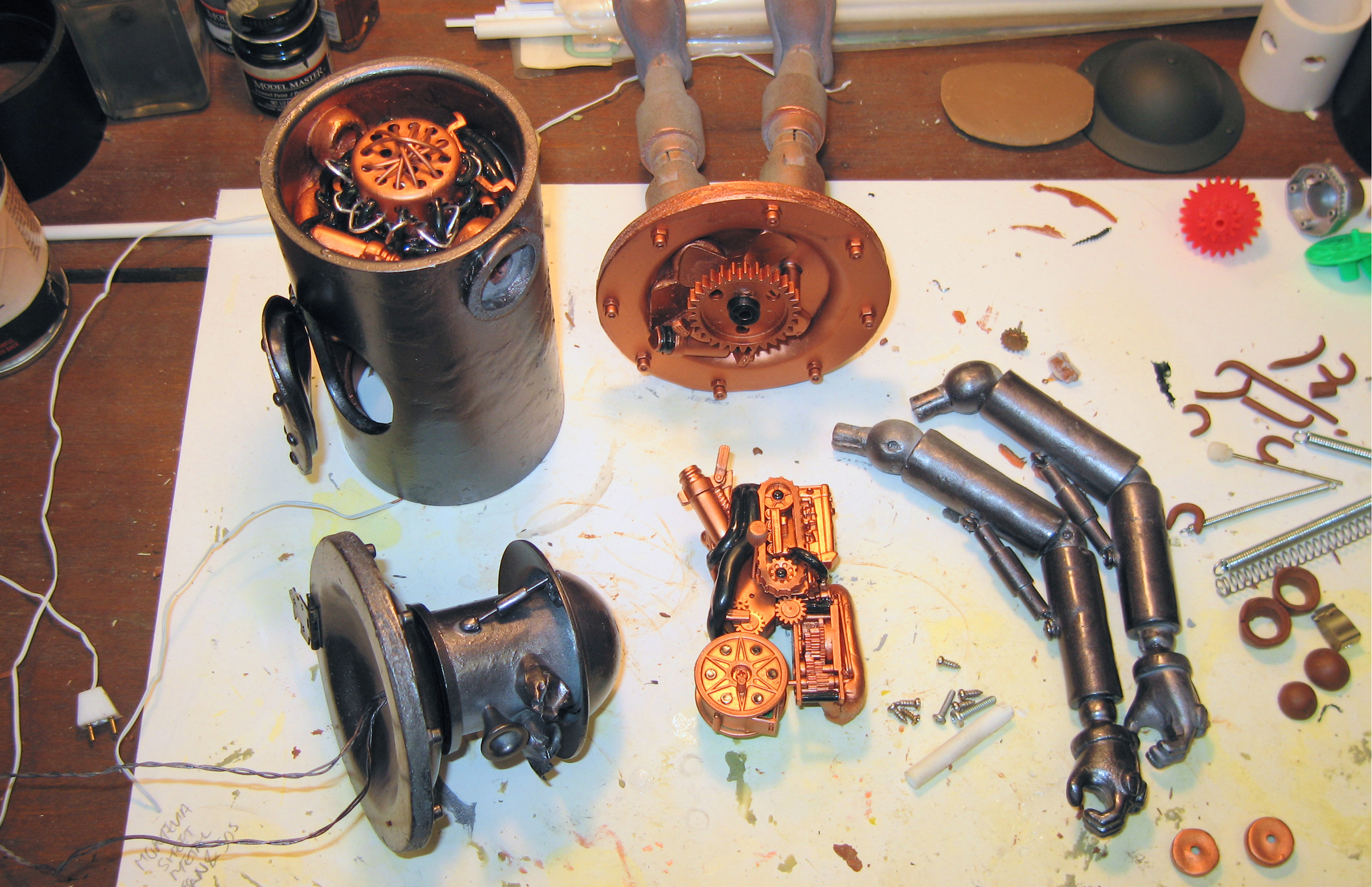 Next Paul paints the major components: copper for the interiors, exterior trim, and parts such as the mouthpiece; and gunmetal on the exterior. To give the exterior a metallic-looking finish, Paul uses a product called Rub ’n’ Buff in the final stage. 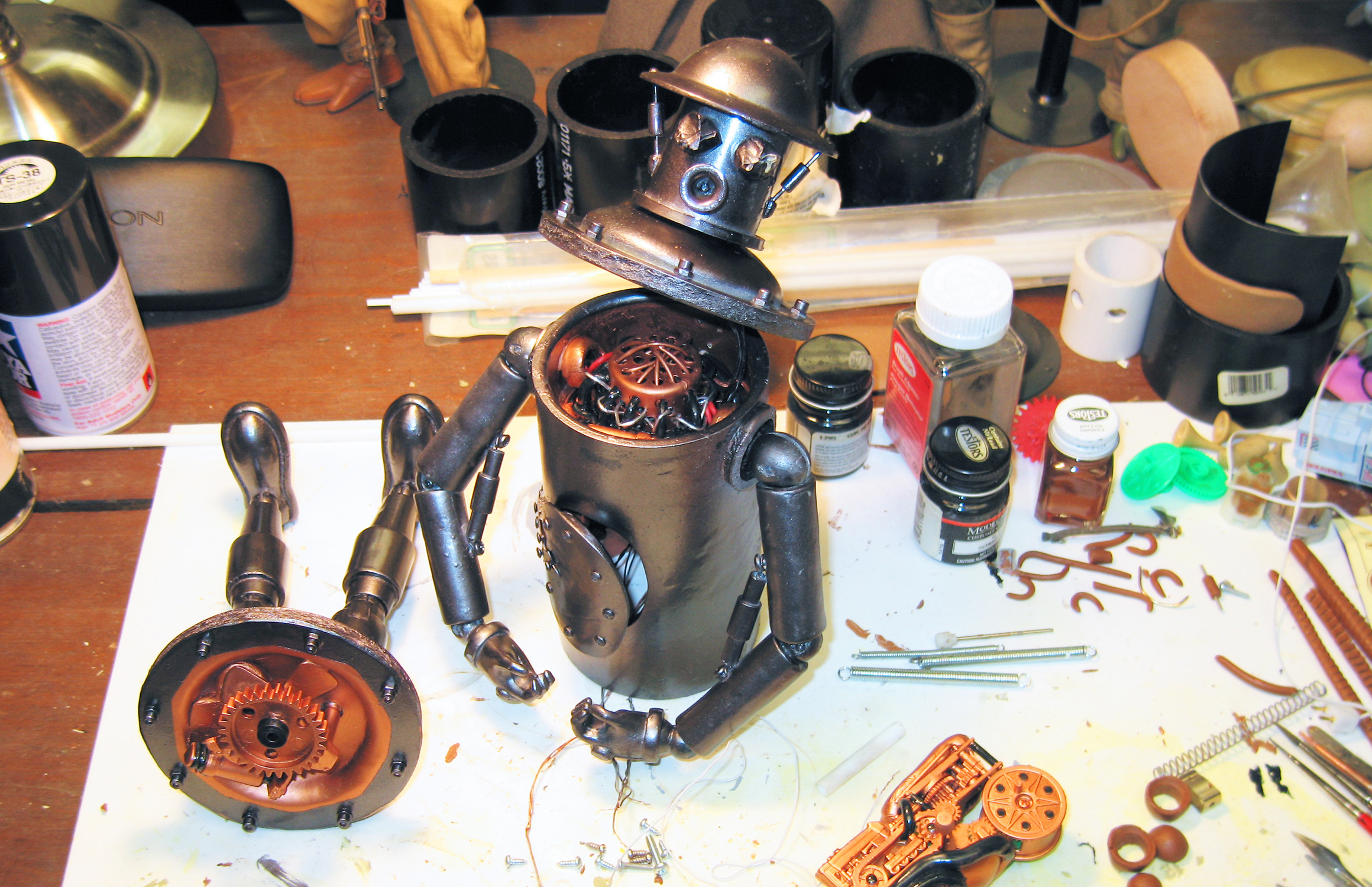 Boilerplate’s head is attached to the torso by a hinge in back. Paul threads a spring through the torso and attaches the arms to it, so that each arm can rotate independently. 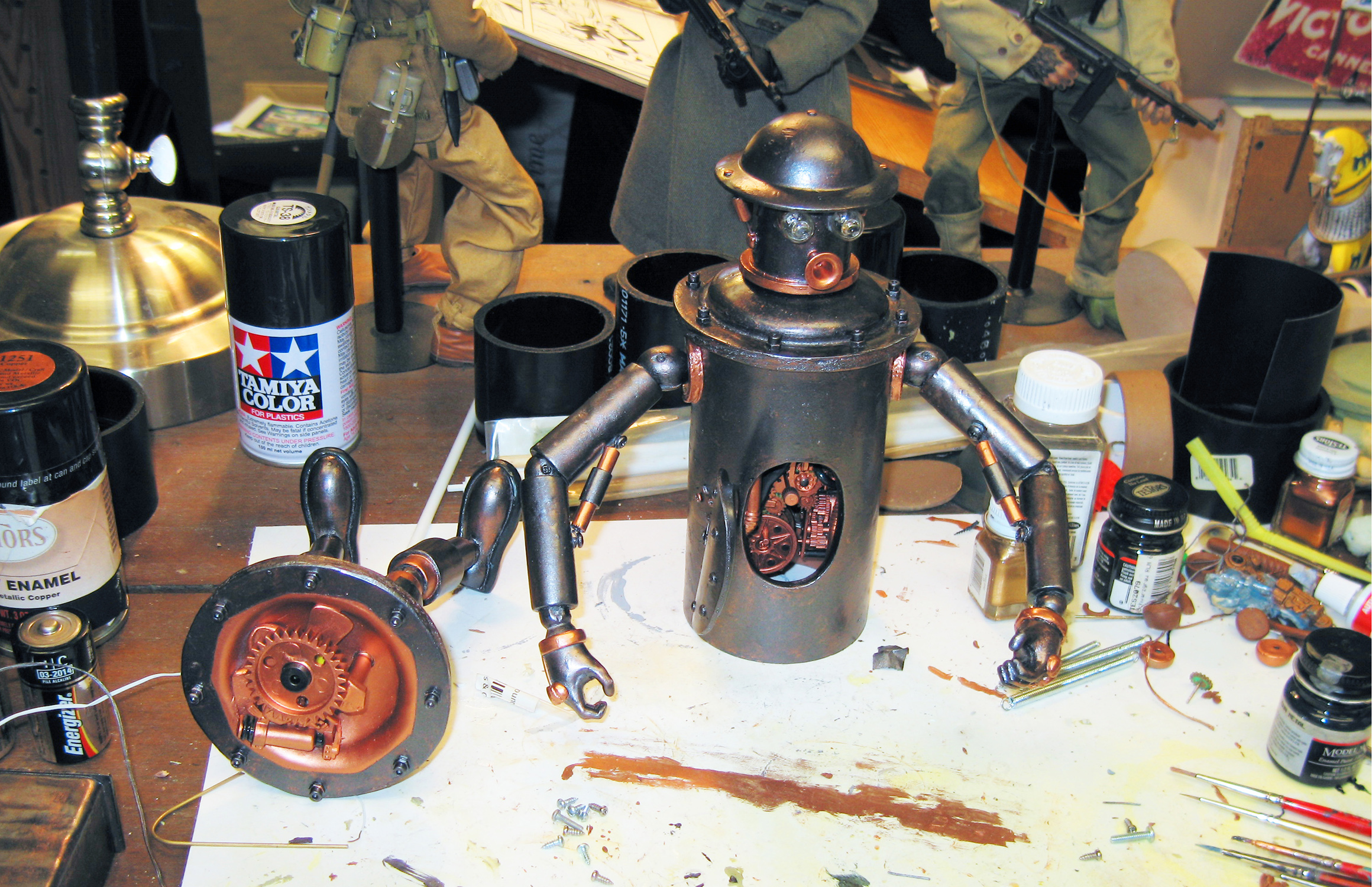 Final painting details are completed. Paul installs and tests the robot’s engine to see if the wind-up mechanism (that turns tiny gears and a wheel) functions properly. 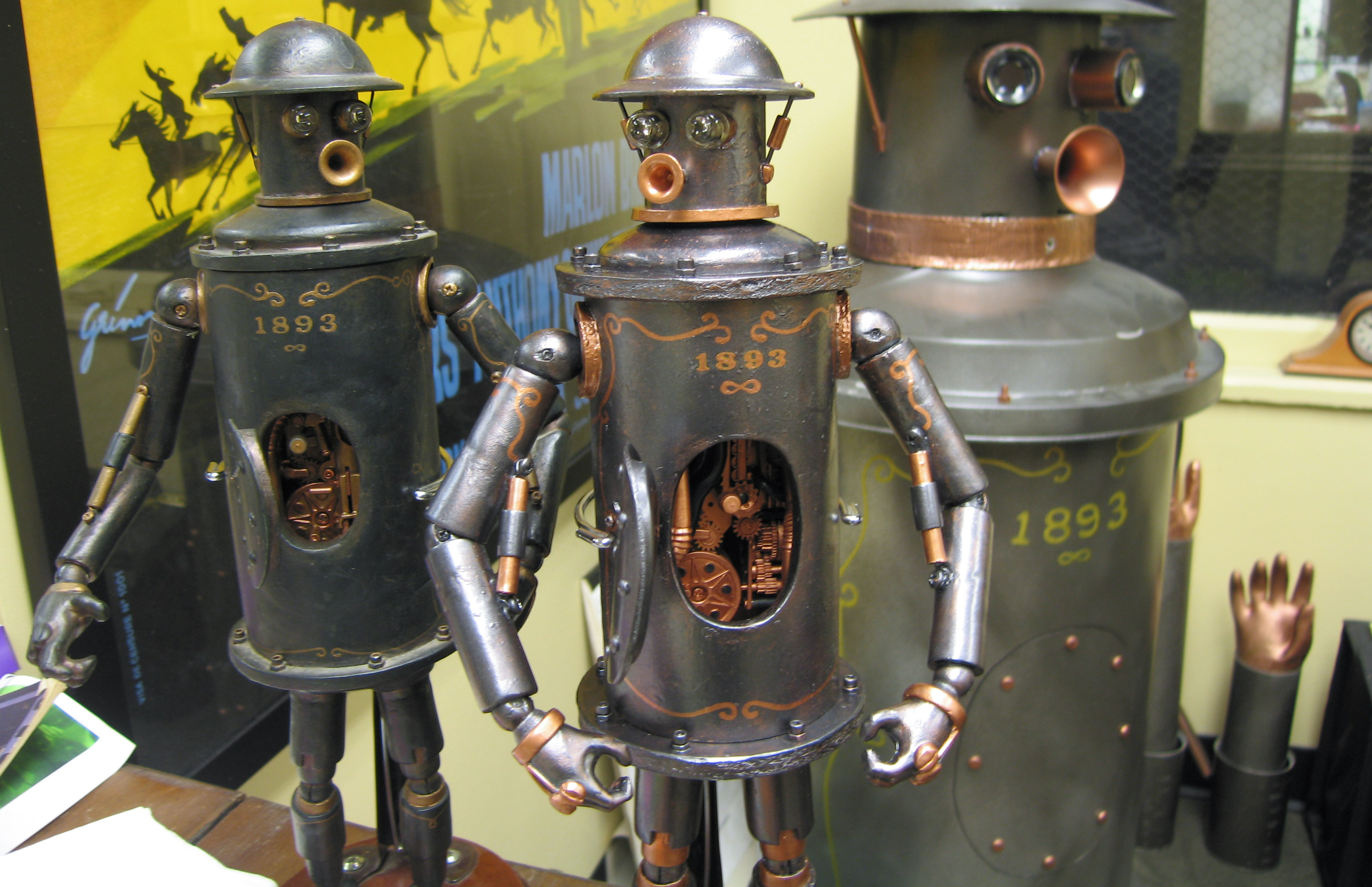 Comparison of the original build (gold version) with the latest one (copper version, in foreground). 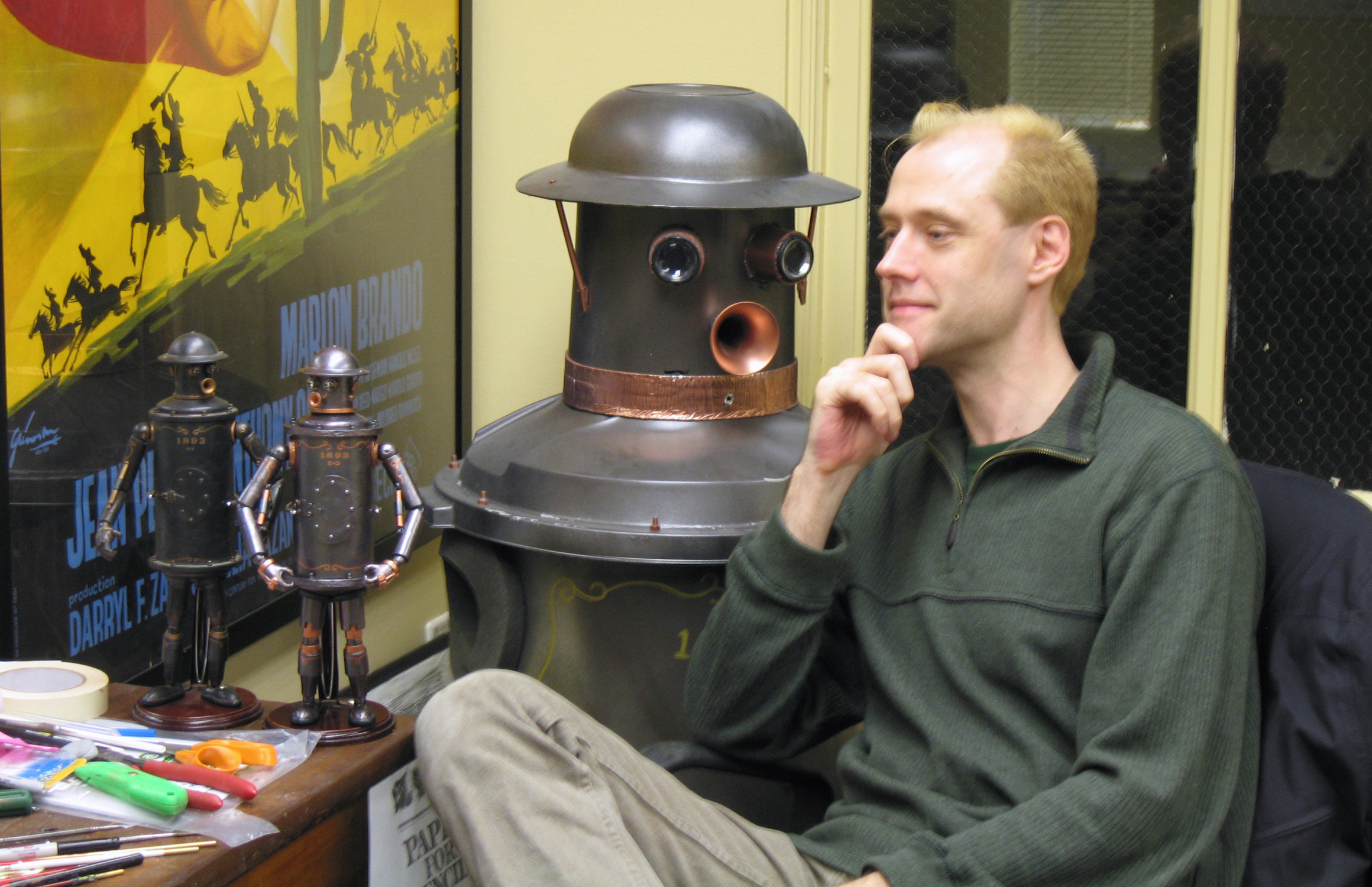 The artist contemplates his creation. In the background is a Boilerplate Halloween costume made by our friend Rich Powers, which is also featured in our book.