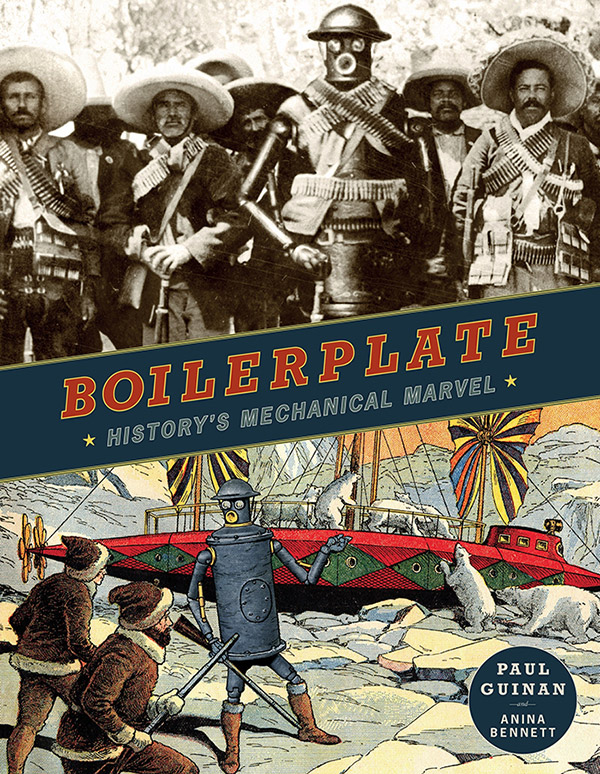 Boilerplate: History’s Mechanical Marvel, ostensibly the biography of a 19th-century robot soldier, is an illustrated hardcover book that deftly blends historical fiction with science fiction. It dramatizes formative events at the dawn of the 20th century through tales of the robot and its inventor, Archibald Campion, who thinks his machine can “prevent the deaths of men in the conflicts of nations.”

Boilerplate charges into combat alongside Teddy Roosevelt and Lawrence of Arabia, builds railroads in Africa, makes silent movies, and more, all while hobnobbing with the likes of Mark Twain and Nikola Tesla. Also featured as a supporting character is Archie's friend Frank Reade Jr., hero of dime novels and of our companion book Frank Reade: Adventures in the Age of Invention.

Paul came up with the concept for Boilerplate long before we did this book. He built a model robot, digitally inserted it into some old photos, and posted a few very short stories on our old website. Those early stories were published in our graphic novel Heartbreakers Meet Boilerplate.

Autographed Boilerplate books and comics are available from our Etsy shop.

Our Threadless shop carries a variety of art prints, T-shirts, and other fine goods.

“A masterpiece of fictional reality”
—The Telegraph UK