No record survives of what the Aztec emperor’s bedroom looked like. Our depiction of Motecuhzoma having a raised four-poster bed may seem Eurasian, but the architectural idea of small, stepped platforms existed in various forms throughout Mesoamerica. They were used for everything from religious ceremonies to gladiatorial combat. There were also platforms that worked both as benches and a raised surface for a speaker addressing an audience. Outside Tenochtitlan’s law complex, there was a small stepped platform where public announcements would be made.

Considering Motecuhzoma’s ego, it’s possible he would place his petate (a woven mat for sleeping) on a platform. There are archaeological examples of living areas with raised sections, used for various purposes. 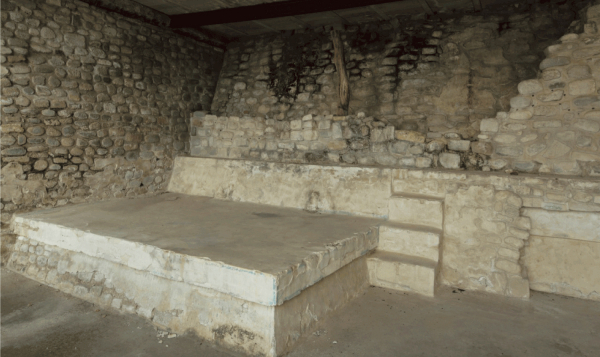 Interior of a house in Xochicalco.

Motecuhzoma probably had his mat laid out on the floor or a low-slung wooden platform, and covered with cotton blankets. The 16th century text, Cronica Mexicayotl, describes certain kinds of blankets that were stuffed with feathers. They were called "yhuitilmatli," what we’d call quilts or comforters. There's even references to mattresses that were similar to a futon.

In the case of our dramatization, I couldn’t envision the most powerful person in their known world sleeping so close to the floor, no matter how fancy the bedding. I wanted the emperor to be visually exalted. Between the preponderance of small, stepped platforms in Tenochtitlan and the character of Moctecuhzoma, I decided on a raised bed for him.

Arranging four columns around a small space, to suspend curtains or insect netting, is ancient and global. Tenochtitlan didn’t have doors; privacy was achieved with curtains or standing wooden screens. Anina and I had the privilege of visiting the palaces and residences of Teotihuacan, and much of my interior design work in this series comes from that city. Teotihuacan culture predated the Aztecs by centuries, but was the Aztecs’ greatest aesthetic influence. 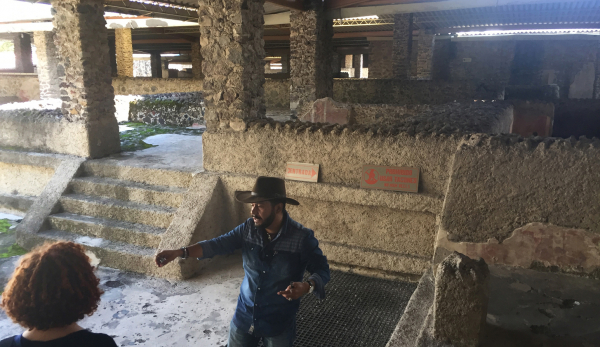 Anina with our friend and historian Enrique Ortiz at a residence in Teotihuacan. It’s easy to imagine how some interior spaces used hanging fabrics to divide spaces.

Motecuhzoma probably had large wooden screens surrounding his bed. Such screens were described by chroniclers as having elaborate carvings on them, and being used for privacy when Moctecuhzoma had meals. In Moctecuhzoma’s bedroom there would have been columns, some with drapes between them.

However, in our comic I chose not to depict him behind wooden screens. Too often, Moctecuhzoma is interpreted in histories as being cowardly. Putting him behind screens would’ve visually suggested he’s hiding or phobic.

I wanted to show the opposite of that: someone in an expansive setting, curtains open, ready to receive word of strange visitors to his world. 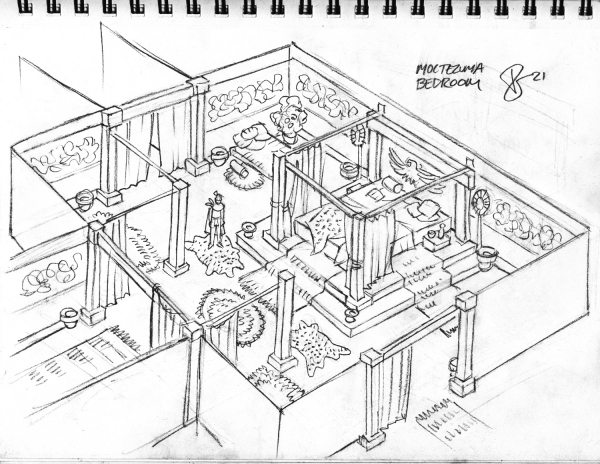 My sketch design for the Emperor's bedroom.

For the mural designs, I used the Lords of the Night, as depicted in the Borgia Codex. It seemed appropriate for a bedroom. Seen below are Piltzintecuhtli, Tlazolteotl, Centeotl, Tezcatlipoca, and an eagle on cactus for the emperor's headboard.

And the the wives of Motecuhzoma? Referenced from the Codex Vaticanus. 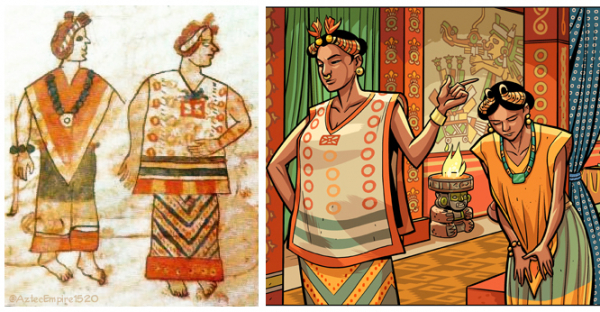 I try to keep as close to the historical reality as possible. But, I’m not an archaeologist, just a storyteller who utilizes archaeology. I hope my depictions are authentic, even if they’re not always precicely accurate. There are instances where I take some artistic license, but always after serious consideration.

Have a good night and sleep tight!