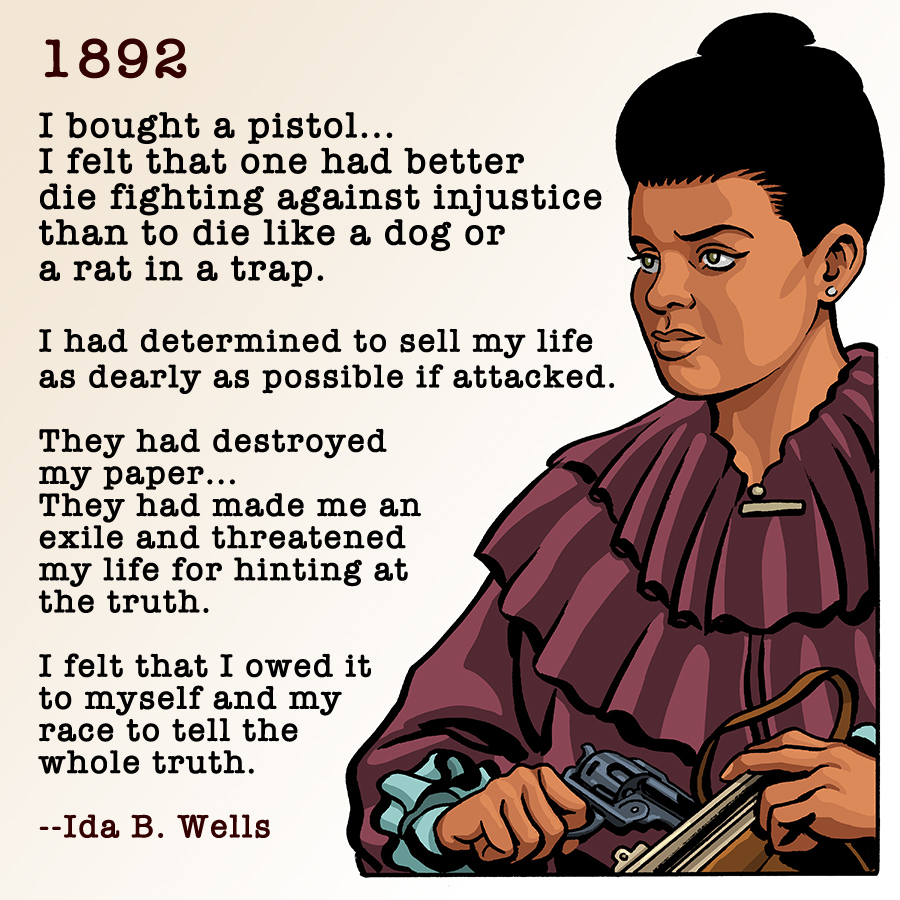 Looking Back on Hope

Last summer, Paul and I were invited to contribute a story to the Comic Book Legal Defense Fund’s (CBLDF) Liberty Annual benefit comic. The theme—“Great Heroes: A Call to Optimism”—was especially appropriate before the U.S. presidential election. Now, in the ongoing aftermath of the election, it’s downright crucial.

Asked to create a short story “about a real person whose actions have positively inspired you,” we decided on Ida B. Wells, a strong-willed woman who spent her whole life fighting oppression and bigotry. Ida was among our nation’s first investigative journalists, amassing and publicizing evidence of the racist motives behind lynchings in the late 19th century. She fought for the human rights of African Americans and women. She shattered stereotypes. And she never, ever gave up.

In a few pages, we told part of Ida’s story and America’s story, drawing parallels to the present day. The first page opens with a row of four panels that take us back in time, from Rosa Parks in 1955 to Ida Wells in 1884—tracing a line through the history of resistance that eventually helped lead to desegregation. Connecting the dots. (Paul researched every aspect of our story, including that row of panels; scroll down to see his notes on it, followed by the complete story.)

Born a slave, Ida became a writer, a journalist, an activist. She persevered despite her parents’ early death, the murder of her friends, the destruction of her printing press, death threats, and a host of other obstacles.

I could use a little of Ida’s indomitable spirit and dogged perseverance right now. When Paul and I finished our story, before the election, I believed Hillary Clinton was going to win. I was one of those sheltered liberals who thought the country wouldn’t vote for a racist, sexist, belligerent narcissist. Racist/sexist, sure—I’m not that sheltered. But I didn’t want to believe people would vote for someone so vulgar and volatile, so dangerous, so clearly unqualified to be President.

Looking back, that attitude and the star-spangled, starry-eyed closing panel of our story may seem stupidly naive. But I stand by the story’s message that social evolution is incremental and requires long-term struggle. Each generation has to pick up the torch. And I still believe in the power of hope—that ineffable force which, in the end, sustains us all. While researching Ida Wells, I was struck by the fact that her radical transformation from schoolteacher to activist/journalist began with an incident similar to an oft-cited trigger event of the 1950s civil rights movement. Ida was dragged off a train car for the same reasons Rosa Parks was kicked off a bus: She refused to move out of a whites-only section of the vehicle.

This similarity provided a perfect opening visual structure for our story. I envisioned a row of panels starting in 1955 with the most famous example of discrimination toward black passengers and working backward in time to 1884, illustrating the theme of generational struggle.

Searching for the most famous examples of African Americans who declined to move to another section of their bus or train, I learned that nearly all of them were women. With limited space in such a short story, I could only fit in two other women to complete the sequence I had in mind.

Since I’m mildly obsessed with historical accuracy, of course my next task was to track down reference for the vehicles involved. For Rosa Parks, that was easy. She was photographed on an Alabama bus for a newspaper’s re-enactment of the event. Rosa wore different clothes for the re-creation, but a police photo shows the outfit and hairdo she was wearing on the day of her arrest. (Always check multiple sources!)

Sarah Keys, I was surprised to learn, was in military uniform when the bus driver confronted her. I found that detail but had to extrapolate the bus based on when and where she was arrested. Same with Irene Morgan’s passenger train car. Ida Wells was riding on the Chesapeake & Ohio Railroad, which gave me a better springboard for visual conjecture.

Below you can see you can see some of the reference I relied on for the opening sequence alone. You can imagine how much I obsessed over the rest of the four-page story that follows. 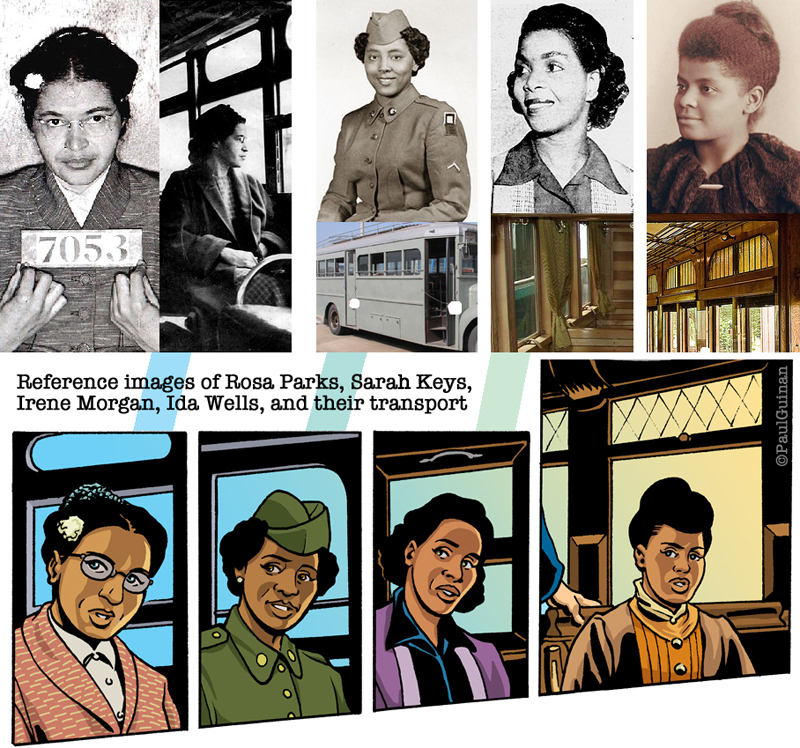