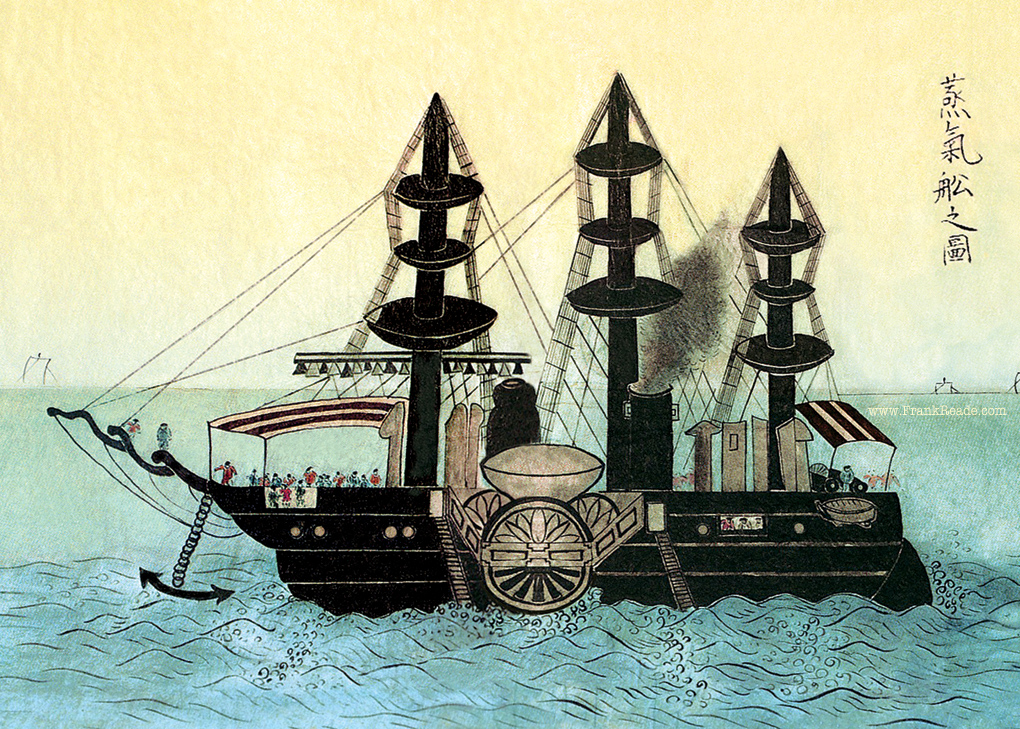 Japan's first contact with the United States in 1853 was a rude awakening. It was an isolationist country that had been at peace for centuries when the United States forced it open to trade at gunpoint. American warships, painted black, showed up in Edo (Tokyo) Bay on July 8th, fired 73 cannon, and threatened annihilation if Japan refused U.S. demands. 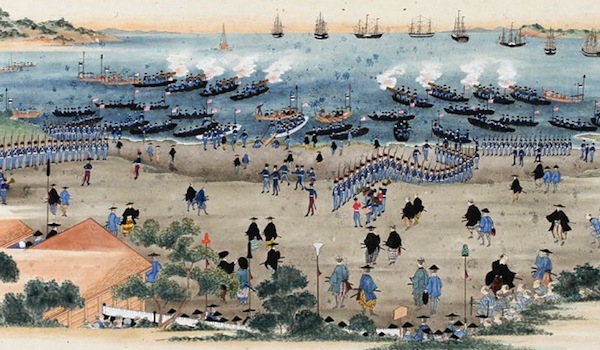 This dramatic military display shocked Japan. In an effort to keep its sovereignty and gain an equal footing with Western powers, the country rapidly built up its technology and military. Many of its people adopted Western manners and clothing.

Recognizing a potential ally that could help secure a foothold in Asia, the United States promoted the Japanese as a superior Asian race that would spread civilization in the region. In 1872, American General Charles LeGendre arrived in Japan to instruct the country in how to justify the invasion of other countries. The following year, Japan invaded Taiwan and added a new word to the Japanese language: koroni, or “colony.”

"Japan must keep her plan in the deepest secret, but must make adequate publicity to the people in the world that she is under-taking to bring the whole of Asia from its barbarous and primitive stage to the civilized stage."
—Charles W. LeGendre, Memorandum to to Ökuma Shigenobu (March 13, 1874)

When Teddy Roosevelt became president in 1901, he encouraged Japan to pursue its own version of America’s Monroe Doctrine and become a policing power in East Asia. In exchange for Japan agreeing to support American interests in East Asia—and especially to keep out of the U.S.-occupied Philippines—President Roosevelt agreed to let Japan take over Korea. In 1905, Japan defeated big, bad Russia in a major war and expected accolades from President Roosevelt.

Instead, Teddy negotiated a peace treaty that Japan considered costly and unfair. He didn’t want the island nation to become too powerful, after all, and he envisioned Russia as keeping it in check. The Japanese felt they’d been double-crossed. Now firmly set on the path of imperial conquest, Japan would no longer submit to America’s whim. Historian James Bradley, whose father helped raise the U.S. flag on Iwo Jima, lays the blame for Japan’s involvement in WWII at the feet of Teddy Roosevelt. Bradley writes in his insightful book The Imperial Cruise, “It was these events in the summer of 1905 that would doom more than one hundred thousand American boys to die in the Pacific theater decades later.” Japan annexed Korea in 1909 and went on to invade China in 1931.

--Excerpt from a sidebar written by Paul Guinan and edited by Anina Bennett, originally published in Frank Reade: Adventures in the Age of Invention