The Best Science Fiction Films of the 1970s

(Which Was the Best Decade in Hollywood Cinema)

Pop culture of the 1970s had a very high level of socio-political content. It was a result of a particularly volatile period in the late sixties, when protest messaging first appeared in mainstream media. From anti-war songs on the radio to subversive stand-up comedians on TV, the times they were a-changing.

Hollywood was also going through a transition, moving away from traditional studio assembly-line production process and supporting more innovative projects from an emerging new generation of filmmakers. Science fiction being one of the best ways of using metaphor for commentaries on our culture, the “Hollywood Renaissance” produced some of the most thematically powerful SF films in the history of the silver screen. Here are my picks for the top ten sci fi movies of the seventies.

A CLOCKWORK ORANGE (1971)
Stanley Kubrick is one of the world’s greatest filmmakers to date. So it follows that A Clockwork Orange is not just the best science fiction film of its decade, but one of the great cinematic works of its era. Kubrick described his piece as a “running lecture on free will.” Adapted from a dystopian novel by Anthony Burgess, the film follows the exploits of Alex, a violent gang leader in a nightmarish future London. Kubrick was excited about the different layers to the story: “political, sociological, philosophical, and, what's most important, a dreamlike psychological-symbolic level.” Despite its thesis-inspiring themes, critics and moviegoers freaked out over the film’s violence. Tame by today’s standards, the scenes that show beatings and rape were shocking in 1971. The film was virtually banned in Britain for more than a quarter-century. Because of its pedigree, A Clockwork Orange played a significant role in changing restrictions on how violence was depicted in cinema. 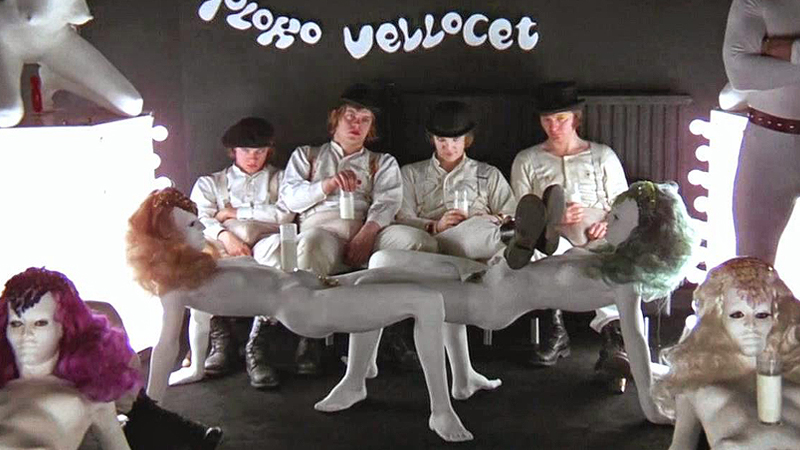 THE MAN WHO FELL TO EARTH (1976)
A collaboration by two of the most eclectic British artists of their time: musician David Bowie and filmmaker Nicolas Roeg. They were exactly where they needed to be to fulfill the needs of this project. Roeg was at the height of his cinematic powers, coming off the successful Don’t Look Now, which remains highly influential among filmmakers. Bowie was totally dedicated to this project, his first studio feature. He incorporated into his nervous yet ethereal performance his real-life drug habit at the time, a daily 10 grams of cocaine. Bowie plays a stranded alien disguised as a human, who’s severely disrupting the technological progress of our society. He’s advancing it with commercial gadgets of his own invention, much to the chagrin of corporate America, so he can build a spacecraft to return home. The film’s tragic story takes place over decades, allowing director Roeg an opportunity to experiment with how a time-based narrative unfolds. The effect is like watching an epic dream. 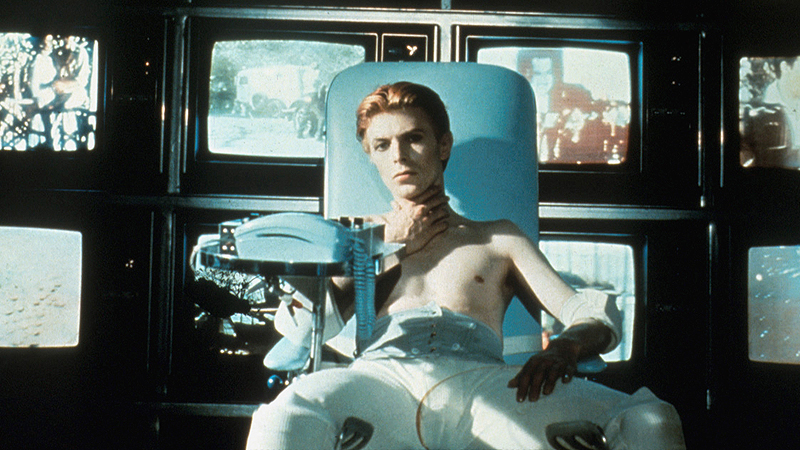 SOYLENT GREEN (1973)
For those who haven’t seen the movie, "Soylent Green" is just a jokey reference about food. It’s actually a gritty film, with deadly serious and prescient environmental warnings. It was a big-budget, star-driven, Hollywood science fiction film—quite a rarity in 1973. Director Richard Fleischer previously helmed the SF epics 20,000 Leagues Under the Sea and Fantastic Voyage, as well as the crime dramas The New Centurions and The Boston Strangler. He brought both sensibilities to this tale of a detective caught up in a high-level political assassination case.

Soylent Green is set in a future New York ravaged by overpopulation, global warming, and regular large-scale food riots. Nothing like this vision of urban dystopia had ever been seen on celluloid. The closest relative was a silent movie from Germany made 45 years earlier, called Metropolis. Textured world-building in SF movies is the norm these days, but when Soylent Green was made, the detail of its production was a welcome sight for sore eyes in science fiction fandom. There’s plenty of mesmerizing scenery, from the flawless effects shots of the mega-city to the 70s cop-show interiors. Unique when it was released, Soylent Green’s influence echoes through the decades in subsequent dystopian productions, from Blade Runner to Snowpiercer. 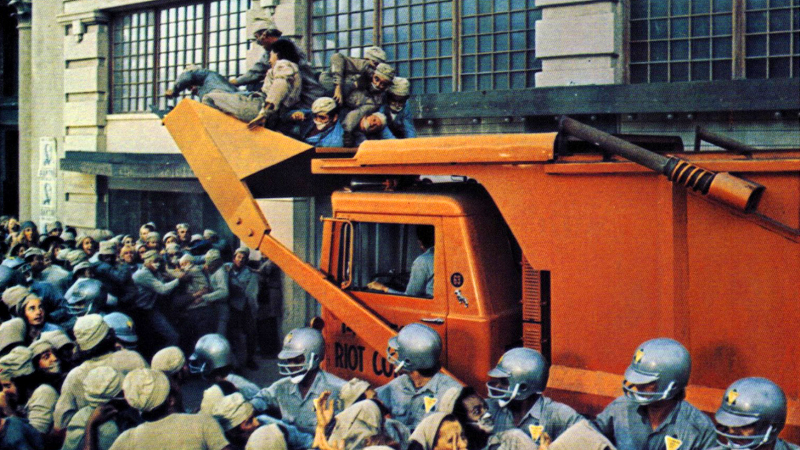 CONQUEST OF THE PLANET OF THE APES (1972)
The first film in this endearing and enduring franchise, Planet of the Apes, is a genuine science fiction classic that’s on my master list of Top Picks by Genre. Unfortunately, ridiculous sequels and TV series have tarnished its reputation. Of the original four sequels, Conquest of the Planet of the Apes is by far the best, and it can be viewed on its own without having seen the other movies. Conquest is an origin story, chronicling how the apes came to revolt against their human masters in the futuristic year 1998 (coincidentally, the same year we launched our website). This overtly political film was made in the wake of the Watts riots and FBI excesses of the late sixties, but its portrayal of a fascistic future America is still relevant today in the wake of the Ferguson riots and NSA excesses. The film deals head-on with issues such as the militarization of police, class privilege, totalitarianism, torture, slavery, and the justification of armed revolt. It was able to take a searing look at these otherwise impossibly controversial topics, because the actors wore ape masks. 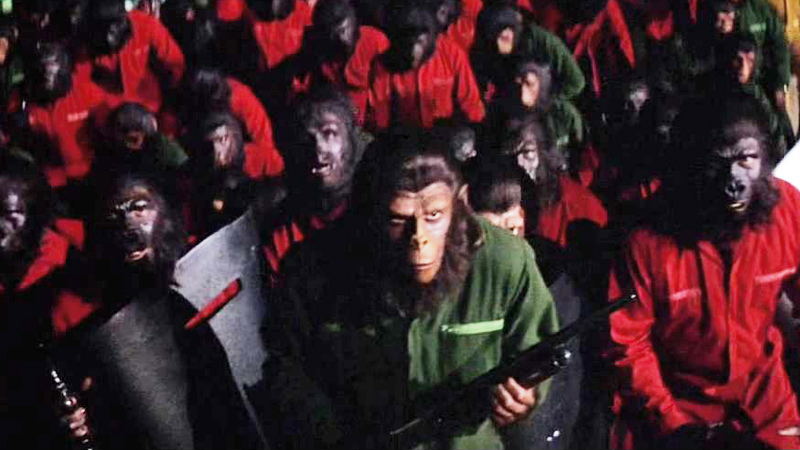 TIME AFTER TIME (1979)
A film that’s often overlooked, yet it’s as good a science fiction romantic thriller as you can get. The perfect geek date-night movie, in fact. H.G. Wells (played by Malcolm McDowell in one of his finest roles) pursues Jack the Ripper (the ever-evil David Warner) from the 1880s to the 1970s via Victorian time machine. While in the future San Francisco, Wells falls in love with a woman (played by Mary Steenburgen, who had a real-life relationship with McDowell during production), but learns that his utopian dream of the 20th century contains nightmares. Jack the Ripper calls himself an “amateur” in the context of the violent 1970s. This delightful, suspenseful fantasy was written and directed by Nicholas Meyer, who successfully balanced a variety of tones from comedy to tragedy. The film was a financial and critical success, and Meyer’s work on Time After Time so impressed Paramount that he was hired to write and direct Star Trek: The Wrath of Khan. 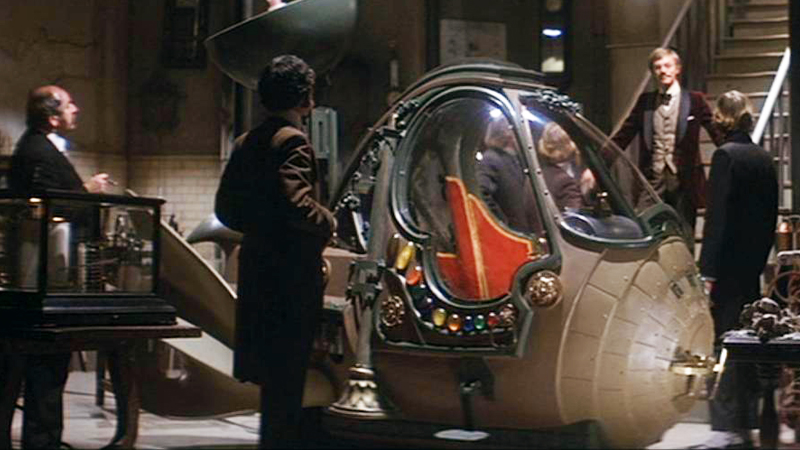 INVASION OF THE BODY SNATCHERS (1978)
The best version of this oft-filmed story about pod people. Director Philip Kaufman’s other work includes helping to develop Star Wars and Indiana Jones, as well as directing the best astronaut movie ever made, The Right Stuff. He was part of the Bay Area filmmakers circle that included Francis Coppola and George Lucas. Kaufman’s version of Body Snatchers masterfully combines naturalistic paranoia, stylistic thrills, and astute observations about social ennui. The production filmed without sets, minimally redressing existing locations. The heightened realism adds to the sense of urgency in the narrative. Donald Sutherland, of the 70s offbeat-looks movie star generation, stars as the increasingly endangered human protagonist. A first-rate cast includes SF genre veterans Leonard Nimoy, Jeff Goldblum, and Veronica Cartwright. We even get a cameo from the star of the original film version, Kevin McCarthy, seemingly on the run from pod people since the 1950s! 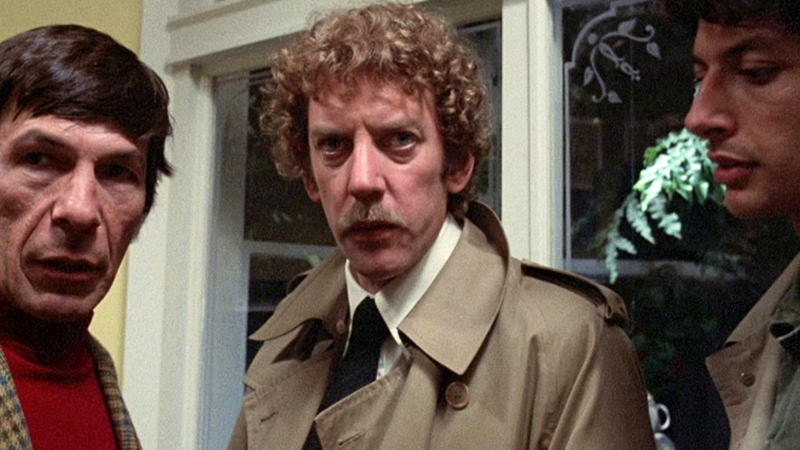 WESTWORLD (1973)
Two decades before Jurassic Park, Michael Crichton wrote and directed another movie about a theme park run amok: Westworld. This innovative movie not only holds bragging rights to the first computer-processed imagery in cinema, but also was the first film to mash up the historical (an Old West town) with the futuristic (the cowboys are robots). When a robot revolt takes place in a Western-themed park, one of the scientists theorizes a computer virus is to blame. The concept was so new in real life that it wasn’t called a virus yet, but is referred to as a “disease of machines.” Like Meyer’s Time After Time, Crichton’s directorial debut easily shifts tones: A silly moment in a saloon is immediately followed by a graphic shootout, for example. In 1973, it was especially startling for a PG-rated SF picture to show squibs depicting bullet exit wounds. Even the protagonist, played by prototypical urban neurotic Richard Benjamin, is disturbed by the result of his own gun violence.

Fun facts: The robot gunslinger played by Yul Brynner is wearing the exact outfit Brynner wore in The Magnificent Seven. I like to think that in the world of the movie, the Westworld theme park designers did that deliberately. Also look for Gene Roddenberry’s wife, Majel Barrett, playing the owner of the town’s brothel (sexbots being yet another cinema first for this film). 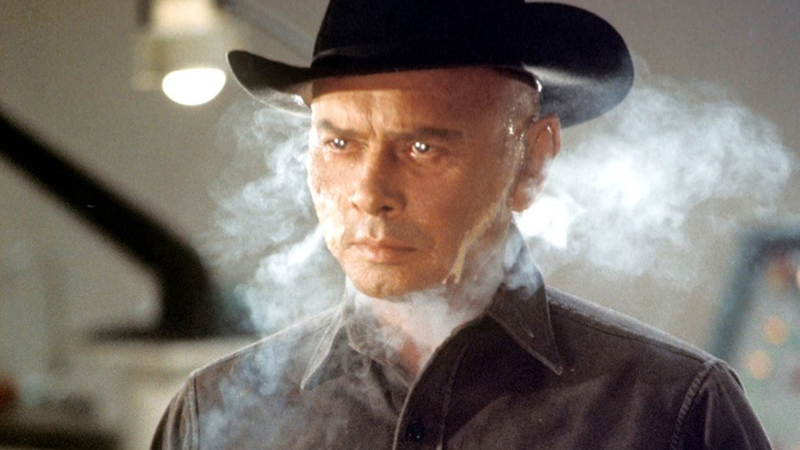 ROLLERBALL (1975)
A sports movie that’s not about sports! Five corporations run a nationless world in the distant year 2018. All warlike urges are sublimated into one global league sport. Although rollerball is designed to demonstrate the futility of individual effort, over the years a champion has emerged—to the dismay of the ruling corporations. The film uses this scenario to muse on the imbalance of power between persons versus corporations, predicts the increasing control of information to maintain power, and gets in some biting satire along the way. (When a liquid memory core in Geneva accidentally erases the entire 13th century, the programmer laments, “Not much in the century, just Dante and a few corrupt Popes, but it's so distracting….”) James Caan brings his macho cred to the noble role of a warrior who wants to know why he fights, and Mercury Theatre alumni John Houseman is perfectly cast as his calculating corporate boss. The film really comes alive during its dynamically shot matches—think Gladiator meets Kansas City Bomber. Along with A Clockwork Orange and Conquest of the Planet of the Apes, this film was criticized for its depiction of violence when it was released. How quaint. 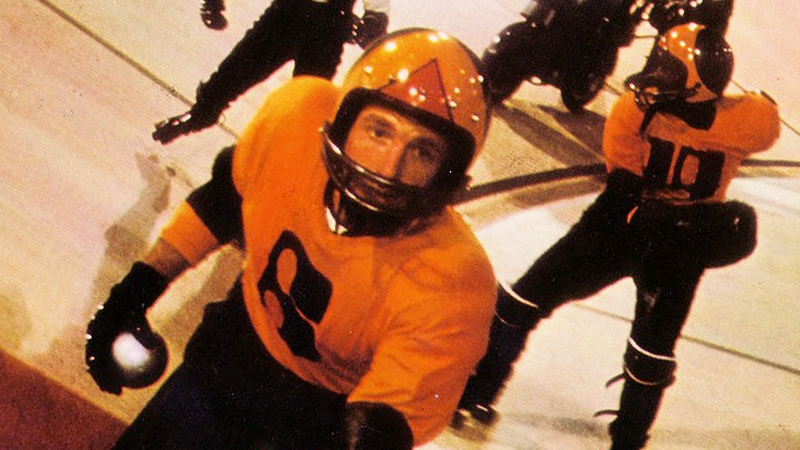 SILENT RUNNING (1972)
After working for others on the giant SF productions 2001: A Space Odyssey and The Andromeda Strain, special effects expert Douglas Trumbull got a chance to direct his own project, albeit a small one. He made the most of it in Silent Running, impressing everyone in the industry with how much he put on screen for so little. Trumbull came up with the story of a botanist, played by Bruce Dern (Laura’s dad), who is tasked with tending Earth’s last forests. They’re being stored in domes aboard an American Airlines freighter that’s cruising the solar system. The film was shot aboard a decommissioned aircraft carrier, redressed to create a very convincing and hugely scaled spacecraft. The botanist has three drones at his disposal, played by double-amputees in robot suits. The robot characters Huey, Dewey, and Louie were realized so successfully that they rival the overwrought Dern’s emotional power. Some viewers may have a hard time with the 1970s emotional earnestness of the poignant last act, but I’m a sucker for the end song, sung by folk legend Joan Baez and written by Peter Schickele (aka P.D.Q. Bach). The drones became the direct, and acknowledged, inspiration for R2-D2 in Star Wars. 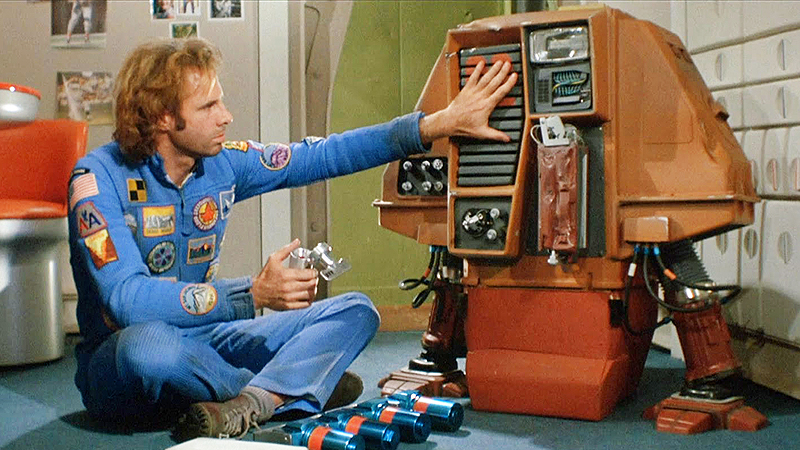 STAR WARS (1977) / ALIEN (1979)
At the end of the decade, these two movies heralded the end of a strong run of socio-political SF cinema. They have a lot in common: Both Star Wars and Alien were filmed at Pinewood Studios in England. Neither movie was expected to perform at the box office as well as it did. Both are influenced by B-movies, acknowledged by their creators as being homages to an earlier era of moviemaking that was more rollercoaster than thought-provoker. Most important, each of these movies was more an iconic story set against a science fiction backdrop than a science fiction story itself. The other films on my list can’t easily be transposed to other settings, but Alien can be seen as a haunted house story and Star Wars as a samurai story. They’re concerned mainly with traditional hero struggles of courage and sacrifice. The less reflective, more action-oriented approach of these movies resonated with audiences who may have been tiring of “bad news,” and showed Hollywood a new way it could use science fiction to fill movie theater seats. The age of the summer sci fi blockbuster had begun. 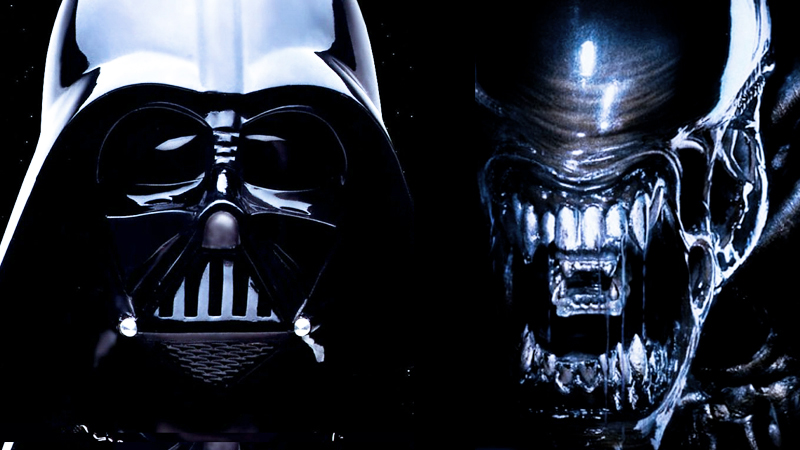