A Visit to the Templo Mayor 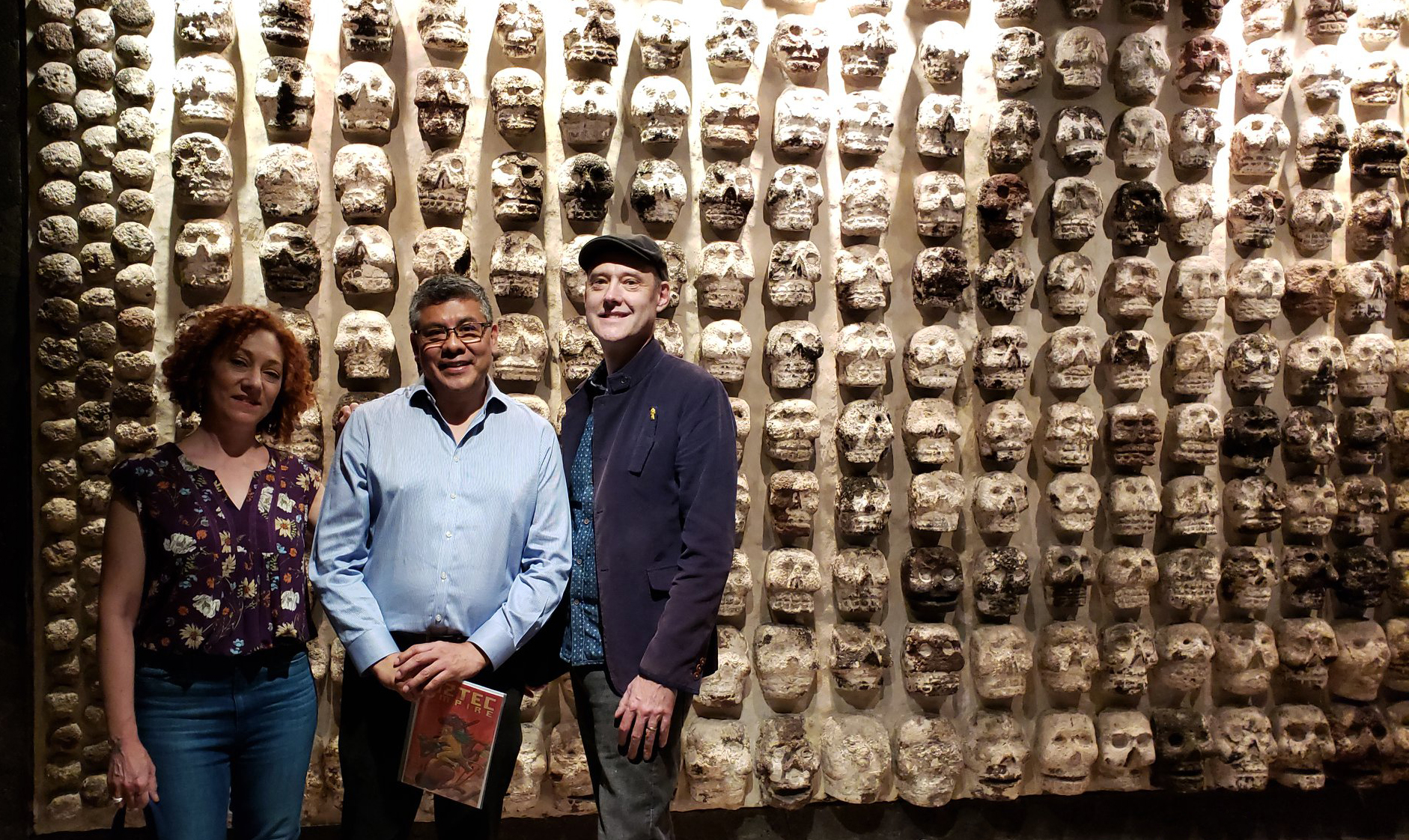 In November 2019, Anina and Paul spent 10 days in Mexico City during the 500th anniversary of Moctezuma’s and Cortes’ first meeting. It was our first ever visit to Mexico, and we packed in plenty of Aztec Empire–related experiences. In this series of blog posts, we’ll share some of our photos and the history that lies beneath CDMX.

Mexico City is built on top of what used to be Lake Texcoco, which was drained and filled in, and several indigenous cities that were on islands and around the lakeshore. One of those ancient cities was Tenochtitlan, the region’s seat of power during the events of the Spanish-Aztec War. The main temple of Tenochtitlan, the Templo Mayor, was excavated in the middle of downtown CDMX starting in 1978.

We were honored to get a private tour of the Templo Mayor ruins and museum in the heart of Mexico City! Archaeologist Diego Jiménez-Badillo, who works at the museum, was very generous with his time and knowledge. We peppered him with many questions as he showed us around on a Monday, when the museum was closed.

Above: Before we tour the site, Diego shows us a cross-section model of the Mexica temple that once stood here. It was built in concentric layers, over the course of centuries, before being destroyed by the Spanish in the 1520s. Above: Diego tells us about Etapa II, or Stage II, the oldest part of Templo Mayor that’s been excavated. It was built around 1400, more than a century before the Spanish arrived. Above: View along excavated walls of the Templo Mayor. The statues are replicas of ones originally unearthed here, possibly representing previous generations of rulers. The originals are on display inside the museum. Above: Interior of the House of Eagles, a large structure next to the Templo Mayor. This site gives a very rare glimpse of Mexica murals and polychrome decor. All the walls of these structures were originally plastered and painted with brightly colored murals. Above: The Huitzilopochtli braziers, with a serpent sculpture between them. Imagine these 500 years ago, fully ablaze, casting dramatic lighting at night!

Above: Base of "Structure B," or the Skull Wall, next to what was once the Templo Mayor. Those are carvings of skulls, not actual human skulls. Above: View of the Templo Mayor archaeological site looking east.

Above: Mexica temples were stuccoed and brightly painted. The replica on the left shows how the big stone serpent heads at the Templo Mayor may have been painted. On the right is one of the actual serpents at the archaeological site. Above: Statues of an Eagle Warrior (there’s now some debate about whether this figure represents a warrior) and Mictlantecuhtli, ruler of the Underworld. These are two of the statues found in the House of Eagles (seen above). Above: Stone masks found among Templo Mayor offerings. Our guide, Diego, is working on a project using an AI to help map their facial structures and try to figure out more about their origins.

Above: Two versions of Tlaltecuhtli, an earth deity whose dismembered body was the basis for the creation of the world in the Mexica story of the fifth and final cosmos. On the left is a fragment a few feet tall, while on the right is a massive 13-foot monolith discovered in 2006 and dated to 1502. Major discoveries are still being made in the 21st century!

Above: There are far too many artifacts in the museum to show here! Some highlights were (left to right) stone sculptures of animals such as this eagle; assorted masks and vessels such as this rendition of Tlaloc (the god of rain, who was super important for obvious reasons, shows up a lot in Mesoamerican artifacts and architecture); and... face knives! The face knives, one of Anina’s favorite unexpected artifacts, are tecpatl, flint or obsidian knives.

Above: Everyday objects from the past. Harvesting and farming tools are displayed on the left. On the right is a diorama of Aztec Empire-era chinampas, or farming beds. The cross-section shows how the raised beds are built up in layers and tree roots help stabilize the edges, so crops can be grown in a lake. We visited modern-day chinampas on another part of our trip and will post those photos soon. Here's a two-minute video Paul made during our visit to these chinampas. Above: Life-size diorama! A full-scale display of a Tenochtitlan market.

Above: Anina took photos of many objects from different angles. Excellent reference material for our series Aztec Empire, which we will be posting exclusively on Paul’s Patreon Page.

Above: History matters! Plaque commemorating the 1982 designation of the Templo Mayor site as a protected archaeological zone. On the right, Paul draws a sketch in the museum’s visitor log. See if you can find it when you visit!

Above: Our special tour complete, we still don’t want to leave, so we head for the rooftop restaurant seen in the background. Above: Still in awe of our visit to the Templo Mayor, we grabbed a bite at the El Mayor, from whence we can see the site. In the far background you can see the Zocalo, where we later saw an amazing Moctezuma/Cortes opera. This place is steeped in history.