A Visit to Teotihuacán 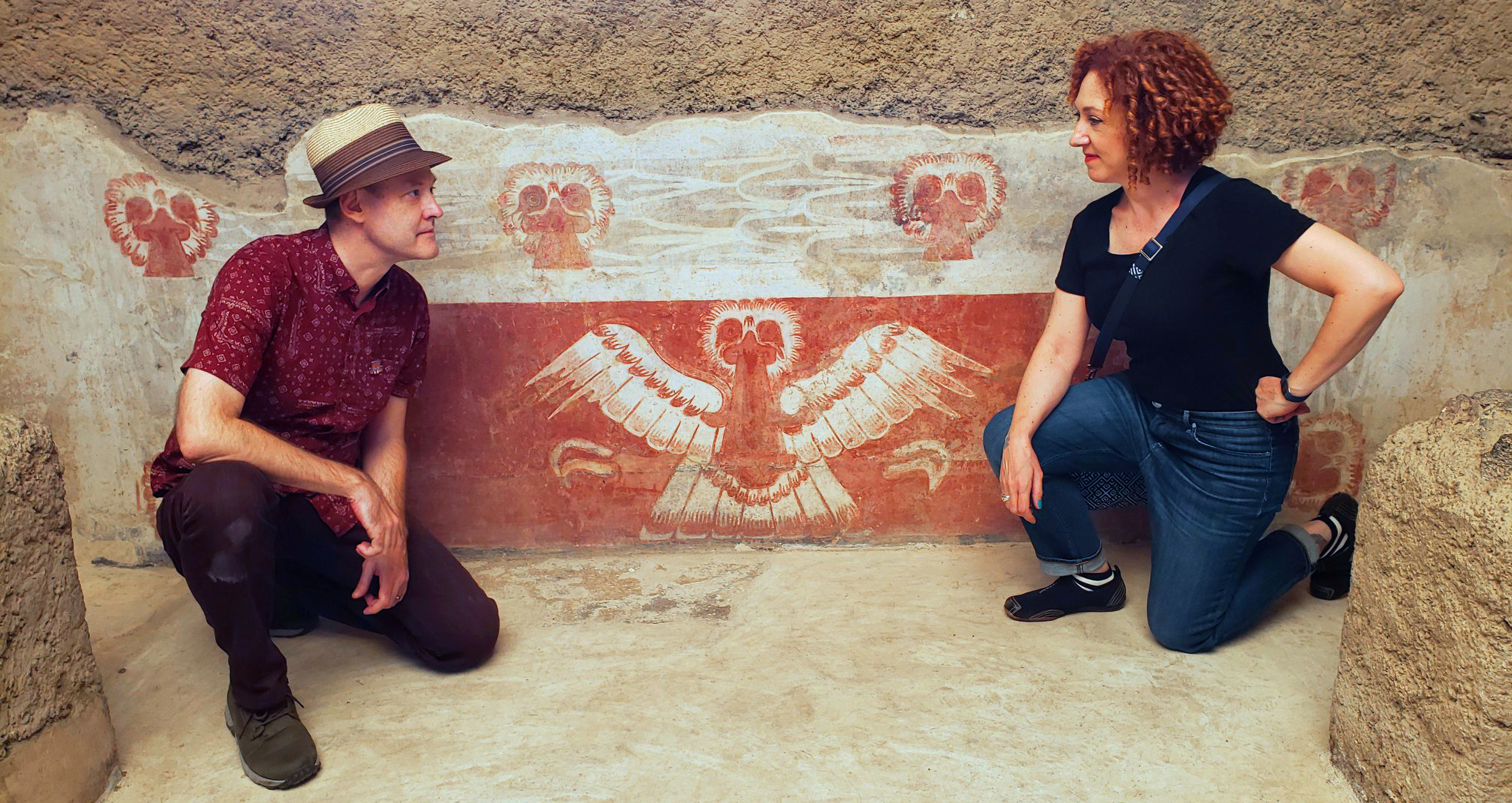 This is the third archaeological site we visited in Mexico, after the Templo Mayor and Tlatelolco: the 2,000-year-old city of Teotihuacán, which not only has spectacular (reconstructed) pyramids, but also gorgeous (original) wall paintings. It was an all-day affair! Above: The Temple of Quetzalcoatl, showing alternating stone heads of Quetzalcoatl (aka the feathered serpent) and Tlaloc, the ubiquitous god of rain. The Museo Nacional de Antropología has a huge replica of this wall, painted in full color as it would have been originally. We’ll include that in an upcoming post! Above: Our friend and guide, Enrique Ortiz, kicks back with Anina as we view the Temple of Quetzalcoatl. In the wall and stairs, you can see little tiny stones in the mortar between the bigger stones—this signifies that the structure was rebuilt after the Spanish colonized Mexico. On the right, Enrique and Paul in the Palace of Quetzalpapálotl. Enrique is a celebrity historian, often appearing on Mexican radio and TV talk shows when the subject is Mesoamerican. Above: The beautiful courtyard in the the Palace of Quetzalpapálotl at Teotihuacán. The ornately carved pillars were inlaid with obsidian and mica. Above: This is the stuff Paul and I get really excited about! Enrique took us to see an ancient Teotihuacán housing complex, off the beaten path and away from the crowds, that still has partially intact wall paintings. This is known as the Palacio de Tetitla. You can get right up next to some of the ancient wall paintings, so long as you don’t touch them! Above: A mural in the Palacio de Tepantitla sometimes called “the Paradise of Tlaloc.” It depicts dozens of people performing all kinds of activities. Zoom in and check out the details! Even though we're glad it’s not crowded at these sites farther away from the pyramids, we wish more people knew about these amazing murals! Above: Months before we took this trip to Mexico, Paul saw a nice floral design in a photo of some Mesoamerican pottery, then used that design to decorate a building column on page 40 of our series Aztec Empire. Months later, visiting Teotihuacán, we saw a column with that exact floral design. Great choice, Paul!

Above: Paul and Enrique head for the Pyramid of the Moon, the second biggest pyramid at Teotihuacán. We opted to climb this one because it’s shorter and less crowded than the larger Pyramid of the Sun—plus you get a view of the big pyramid from this one.

Above: Looking back at the top of the Pyramid of the Moon, behind Anina and Enrique. Above: Paul and Anina atop the Pyramid of the Moon, with the Pyramid of the Sun and Avenue of the Dead in the background. We were surprised to learn that some of the pyramids were partially rebuilt in a restoration effort starting around 1905. Photo by Enrique. Above: Paul just can’t stop climbing pyramids! This is one of the many smaller pyramid platforms arrayed along the axes connecting the major pyramids. Above: We saw this logo at a lot of the places we visited in Mexico City. INAH, or the Instituto Nacional de Antropología e Historia, is a government agency that "investigates, preserves and disseminates the nation's archeological, anthropological, historical and paleontological heritage in order to strengthen the identity and memory of the society that holds it." Now that's a mission we can get behind.

Below: At the end of our day, we went to get an early dinner... in a cave.

After spending all day taking in the splendor of Teotihuacán, no ordinary restaurant would suffice. Enrique knew just where to go: the nearby La Gruta.

Above: This cave has been a restaurant since 1906, when Presidente Porfirio Diaz, supervising the Teotihuacán pyramid restoration, reportedly used it for banquets. This sign next to Paul commemorates Diaz’s visit. Layers and layers of history!